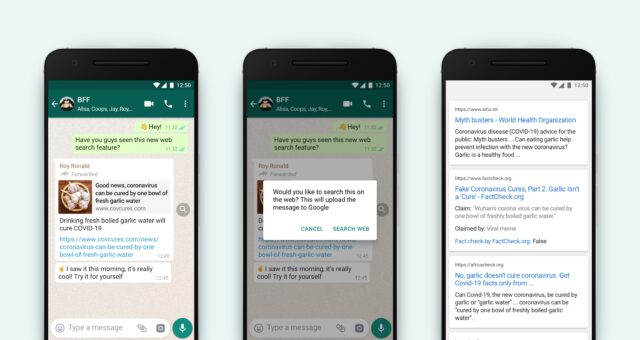 WhatsApp has implemented a new search feature that helps users quickly search the web to access information, debunking misleading viral messages. The new feature is being piloted in a small number of countries on Android and iOS.

In a blog post, WhatsApp has announced it has begun to offer a search feature to users. Starting today, users can quickly tap the magnifying glass on the right side of a message. A pop-up window will appear asking users if they would like to search this topic on the web. Accepting, users will be taken to the web and be offered reputable sources of information. This is in a bid to squash misinformation that has plagued the messaging app for quite some time.

In the example given through the featured image on the post, a message can be seen claiming that “drinking fresh boiled garlic water will cure COVID-19”. Going through the motions, the final picture shows multiple sources of helpful information, including a myth busters page for the World Health Organization.

WhatsApp says the feature “works by allowing users to upload the message via their browser without WhatsApp ever seeing the message itself.” This allows users to correctly fact-check messages on their own accord rather than WhatsApp doing the legwork by scanning messages for pieces of false information.

Earlier this year, WhatsApp placed a limit on the number of messages a user could forward in a bid to prevent the spread of misinformation.

WhatsApp’s new search function is now available to users on the latest version of the app on mobile and WhatsApp Web. Currently, the feature is available in Brazil, Italy, Ireland, Mexico, Spain, UK, and US.