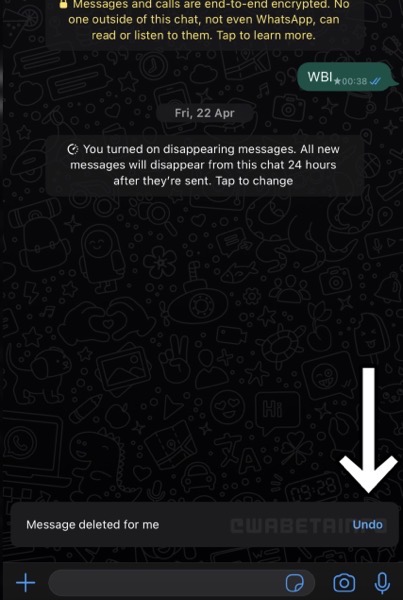 After releasing the WhatsApp beta for iOS 22.18.0.70 update, which brings the ability to view status updates right within the chat list, WhatsApp is now rolling out this feature for recovering accidentally deleted messages.

As shown in the screenshot above, when a message is deleted by using the option “delete for me”, a popup shows up informing the user that the message has been deleted. The new feature adds an “undo” option for restoring the deleted message.

Obviously, if the snackbar disappears and you don’t use the undo feature, you won’t be able to recover deleted messages later. In addition, the snackbar doesn’t show up for messages deleted for everyone, at the moment.

You should be able to get the feature by updating WhatsApp to the 22.18.0.70 beta available on TestFlight.

WhatsApp is currently rolling out the undo feature to select beta testers, whereas a public rollout is expected over the coming weeks.