Microsoft is closing out the month of July with more free games Xbox Game Pass subscribers can look forward to very soon, including chapters 1 & 2 of As Dusk Falls, Inside, Watch Dogs 2, and more. 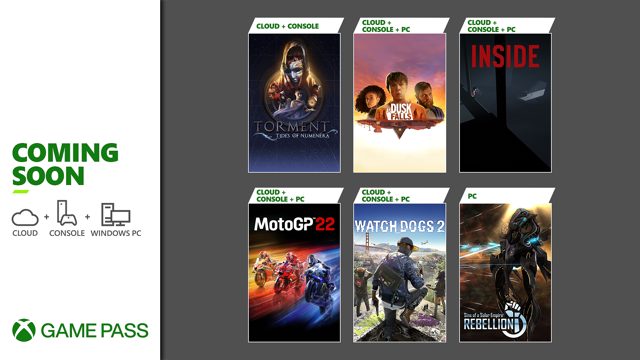 Xbox Game Pass grants access to a rotating catalog of over 100 games, including first-party titles. Subscribers also get to enjoy new games on day one from Xbox Game Studios, indie blockbusters, and more.

This game drop features cult classics, fan favorites, some games Xbox snuck in last week that you might have missed, and more.

As Dusk Falls is an original interactive drama from Interior/Night that explores the entangled lives of two families across thirty years. The choices you make have a powerful impact on the characters’ lives in this uncompromising story of betrayal, sacrifice, and resilience.

Command a space-faring empire in Sins of a Solar Empire: Rebellion, the new stand-alone expansion that combines 4X depth with real-time strategy gameplay.

Play as Marcus Holloway, a brilliant young hacker living in the birthplace of the tech revolution, the San Francisco Bay Area. Explore a massive and dynamic open world offering an incredible variety of gameplay possibilities.

Engines running: give the green light to the most immersive and authentic MotoGP gaming experience ever. More than 120 riders, over 20 official circuits, and all the excitement of the official championship are waiting for you.

Discover the Ninth World built on the bones of extinct, hyper-advanced civilizations and leave your mark on it. Make thousands of essential choices, and meet death incarnated as you seek the answer to the ultimate question: What does one life matter?

Computer security researcher Michael Horowitz has today revealed on his blog that iOS devices do not fully route all network traffic through VPNs, a potential security issue Apple has known about for years (via ArsTechnica). Horowitz notes that while all third-party VPN apps seem to provide the device with a new IP address, DNS servers, and a...
Usman Qureshi
1 hour ago