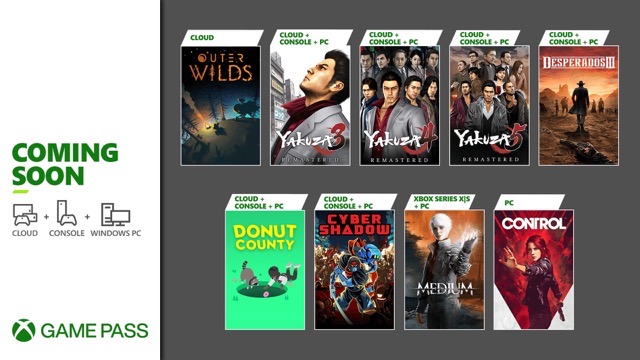 During The Game Awards in December, Microsoft offered a preview of what games were coming to the Xbox Game Pass, the company’s game subscription service for use with its Xbox Series X/S, Xbox One consoles, and Windows 10, as well as with Android devices via xCloud.

Today the full Xbox Game Pass lineup has been revealed for January 2021.

After a secretive agency in New York is invaded by an otherworldly threat, you become the Director struggling to regain control. This third-person, action-adventure game will challenge you to master a combination of supernatural abilities that will keep you on the edge of your seat.

A story-driven, tactical stealth game featuring a colorful cast of characters that epitomize the Wild West, Desperados III takes players on an adventure through rural towns, swamps, and riverbanks, to their ultimate, gun-slinging showdown!

Donut County is a story-based, physics puzzle game where you play as an ever-growing hole in the ground. Meet cute characters, steal their trash, and throw them in a hole.

Explore for the sake of your curiosity with a hand-crafted solar system filled with secrets to discover and perils to avoid while exploring space. Players are given a variety of tools to aid in their space-backpacking adventure

Slash through the techno hordes, leap past traps, and nimbly navigate the ruins of Mekacity. Only you can unlock the secrets to your clan’s ancient powers in Cyber Shadow, the quintessential Ninja Action game.

Travel to an abandoned hotel resort and use your unique psychic abilities to uncover its deeply disturbing secrets, solve dual-reality puzzles, survive encounters with sinister spirits, and explore two realities at the same time.

In a quest to abandon their bloody past, Kazuma Kiryu and adoptive daughter Haruka Sawamura leave the unforgiving streets of Kamurocho for the island of Okinawa to run the Morning Glory Orphanage.

Kazuma Kiryu’s newfound calm as an unassuming cab driver comes to a sudden end as the standing peace between the Tojo Clan and Omi Alliance disintegrates. Forced to reckon with his past once more, the Dragon of Dojima returns to the criminal underworld to protect those he holds dear