According to a new report by research firm IDC, Chinese smartphone maker Xiaomi has surpassed Samsung to claim the top spot in China’s gigantic smartphone market, grabbing a market share of 12.5% in 2014, up significantly from 5.3% last year (via TechCrunch). On the other hand, Samsung’s share dropped from 18.7% to 12.1% during the same period. 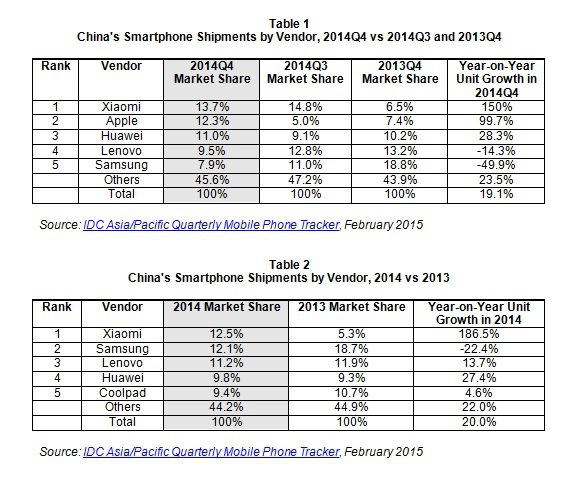 Xiaomi, currently the most valuable tech startup in the world, has gained success in the Chinese market due to a combination of its low prices and online flash sales. IDC notes that Xiaomi has kept its prices down through a combination of “a smaller smartphone portfolio coupled with longer average selling time per device”. The report also highlights that both Huawei and Lenovo saw significant growth in China last year, with Apple specifically doing well, growing its market share in Q4 2014 to 12.3%, up 7.4% year-over-year.

“Overall, 420.7 million smartphones were shipped to China in 2014. In Q4 2014, shipments went up two percent from the previous quarter to 107.5 million. IDC analyst Tay Xiaohan attributed the growth to Apple’s iPhone 6 as well as the increasing number of sales through online vendors like JD.com and Alibaba’s Tmall.com”.

In Q3 2014, both IDC and Strategy Analytics reported that Xiaomi is now the world’s third largest smartphone maker.