Zoom has rolled out a new avatar feature that lets users switch their own face on a video call with a cartoonish animal of their own choosing. 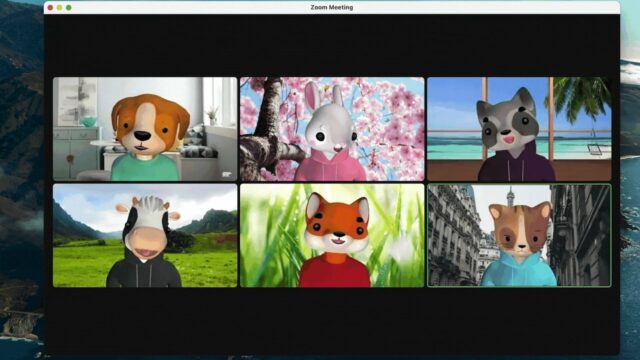 Available for Zoom Meetings and Zoom Webinar, Avatars replace a user’s appearance with a virtual animal that mirrors head movements and facial expressions.

Although Zoom describes the avatars as an easy and entertaining way to engage with attendees and create a bit of fun, the company also notes that they are a good middle ground for users who don’t want to appear on camera but still want to express body language and facial expressions.

Zoom’s technology uses the camera to detect where a face is on the screen and then applies the selected avatar filter. Images of a user’s face do not leave their device and are not stored or sent to Zoom. The feature does not use facial recognition, meaning that it does not identify users.

Take a walk on the wild side with our newest feature: Avatars! 🐶🐰🐮

“While the Avatars feature can tell what is or is not a face, it does not recognize or distinguish between individual faces,” Zoom notes. The feature initially launches with animal avatars, with Zoom noting that updates, including new avatars, will be coming in the future.

“Video communication is a modern marvel, but creating those magical and spontaneous moments that make in-person interactions so special can be difficult in a virtual setting,” Zoom continues in the blog post. “Our teams at Zoom are always looking for ways to help you connect with others.”

The new feature is compatible with Windows and macOS desktop devices as well as iOS mobile devices. Users will need to ensure their device is running the Zoom app on version 5.10.0 or higher.

Back in September, Pluto TV announced it would be launching in Canada in December and as of today, the free ad-supported streaming TV service is now live. This new Free Ad-Supported Streaming Television (FAST) service is from Paramount Global, with Corus Entertainment Inc. as its Canadian partner. Pluto TV says it is the world’s leading […]
Gary Ng
57 mins ago