Yesterday,Â CBC News unveiled a new website redesign and along with it came a new app for the iPhone and iPad! Â I’m a huge fan of CBC News so I am glad they’re joining many of their fellow news agencies in Canada with an app. The app contains a special edition of The National made specifically for mobile, top stories, regional news and weather, and more.

The App has a lot of great features, including local weather, and the ability to send CBC news stories that you are witnessing. Â However, CBC seems to have rushed out this app as there are many of bugs, including a lot of crashing at the moment.Â Another glaring issue is that the Ads on the iPhone version of the app are incredibly intrusive. Â In many cases, the ads will cover the content that you are reading, or even videos you are watching. Â 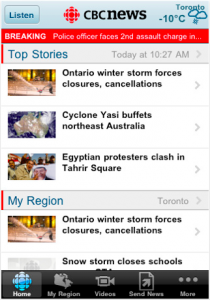 Despite these issues, I’m still excited for this app. Â The ability to send news into CBC is a great idea. Â If you’re at an event where news is happening, it’s incredibly easy to let the CBC know. Â The content is there, and the issues I have are easily fixed with updates. IÂ imagine we will see some updates in the next few weeks. Â The app is also being launched on Android and Blackberry as well! Â You can find the app on iTunes here, and If you’ve checked out the app let us know what you think in the comments below!

Update: It looks as though CBC has just released an update to the app that fixes most of the issues I mentioned here. Â The crashing seems to have stopped so far and the ads go away after a few seconds in the articles themselves. Â Good job CBC!