With so many games on the App store it’s hard to figure out what you’d like and what you wouldn’t. Most people just search for the Top 10 and leap in – and some people simply download dozens of free games, hoping to find one they’ll like. So, instead of going through that headache, or following the masses, I’m going to try and feature one review each week specifically for Game Apps. Last week, it was TiltaFun, this week I present Chuck The Ball. 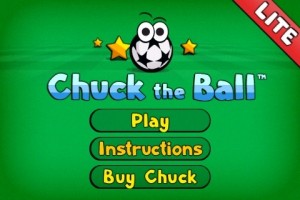 Coincidentally these games are a bit similar. Chuck is a Ball on a mission – to Collect Stars. Instead of controlling his movements using your iPhone’s accelerometer, you place arrow’s in his path to point him in the right direction. You must maneuver rocks, and other objects in your path, as well as avoid spikes. 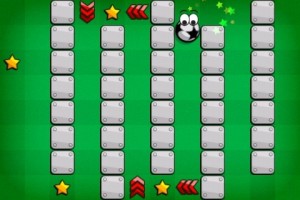 You have to be quick and precise, else Chuck will meet his untimely end (although there’s unlimited Replay). You can play in Free Mode or Challenge (to collect awards). Seems simple enough, and the first few Easy Levels are just that, I even managed to master the Medium difficulty, but Hard was, well, Hard. 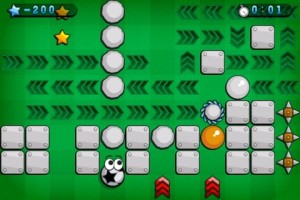 Instead of having to complete some levels before going on to others was a feature I enjoyed, so I skipped the levels I disliked, and found myself playing one our two quick games while waiting in line at Starbucks, or during a long elevator ride. Surprisingly addictive, and the graphics fit the bill, very clean.

One of the best things that this game has going for it is that you can try it out for free by downloading Chuck the Ball Lite (iTunes link) first, which gives only 20 or so levels, but gives you a great idea of the game play. However, the full version has over 80 more levels and and in-game level editor to make your own puzzles!

So give it a try, or for more info check out the Makeshift Games website, and if you like it you can buy the full game for it’s current sale price of $1.99 (iTunes Link).

Or if you’re lucky you can win a Free Promo Code which can be used on the US iTunes Store – just by commenting here and/or following and tweeting me on Twitter (@ChantelleJoytwt). As always – do both and double your chances! Contest ends 12:00 noon EST on Monday, when I’ll announce the winner.

Since this game is currently Featured on the iTunes Store I suspect there are several readers out there who have already tried out the Lite version – share your thoughts!