Elgato’s Eve Motion—launched last November—is an Apple HomeKit-enabled wireless motion sensor, which can help become a powerful part of your connected home. We recently went hands-on with a review unit, to see how well it would integrate into our growing HomeKit setup. 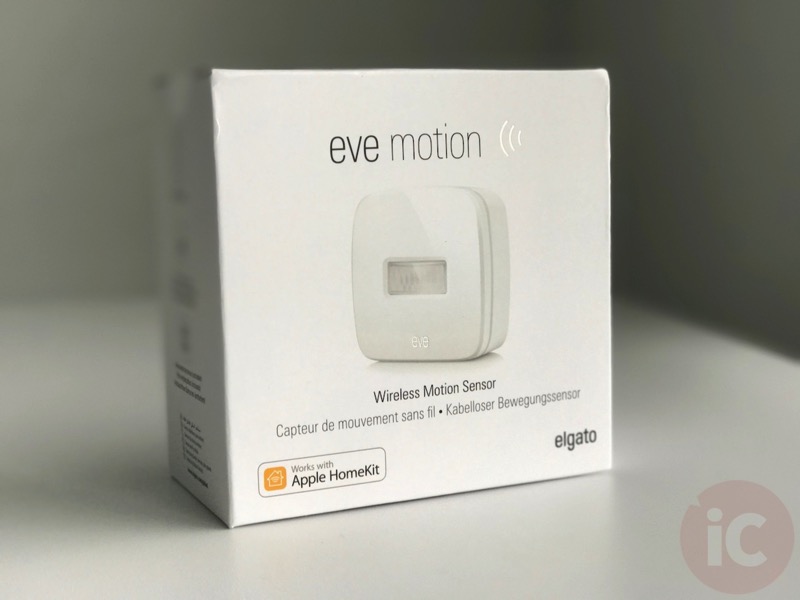 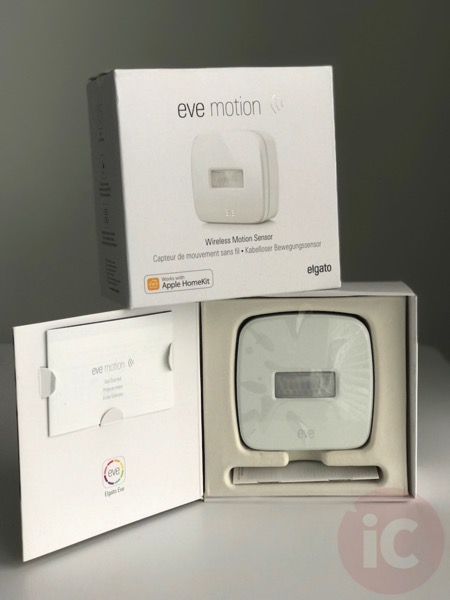 The Eve Motion is powered by two AA batteries, and uses Bluetooth low energy, so no Wi-Fi, hub or gateway is required for it to connect to your iPhone or iPad. But if you want to setup automation in your home, an Apple TV with tvOS 10 or later is required for remote access. 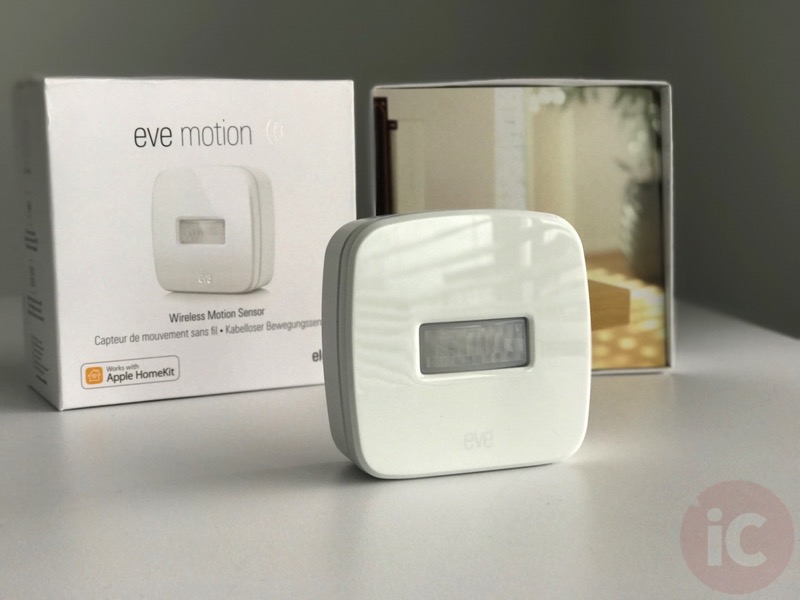 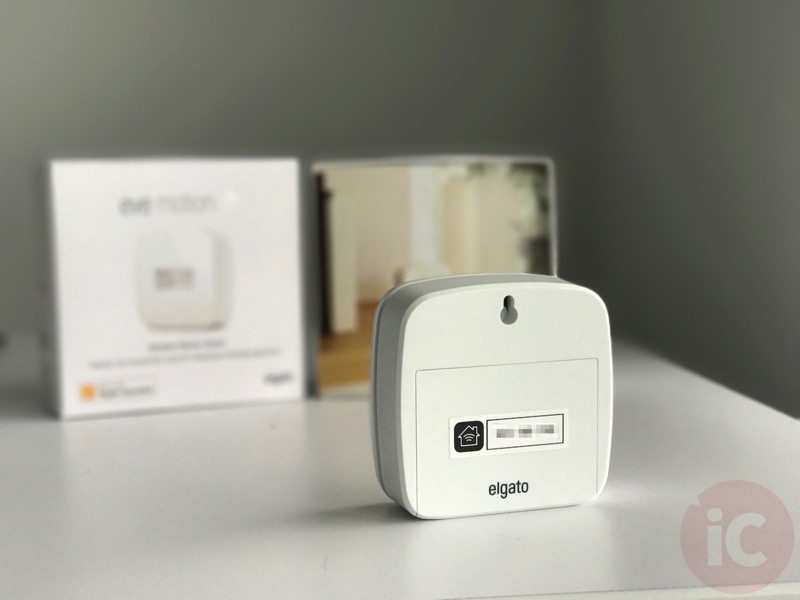 The plastic unit measures in at 8cm x 8cm x 3.2cm and is fairly light. It has a flat bottom so it can rest by itself standing up, while the back has room to mount onto a screw, say outside (there’s IPX3-certified water resistance). Its field of view is 120 degrees, to 9 metres from a mounting height of 2 metres. 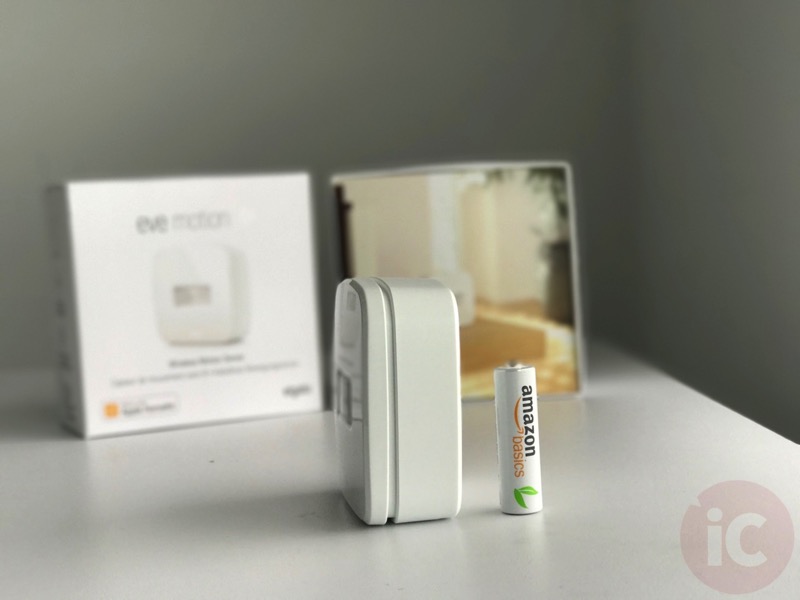 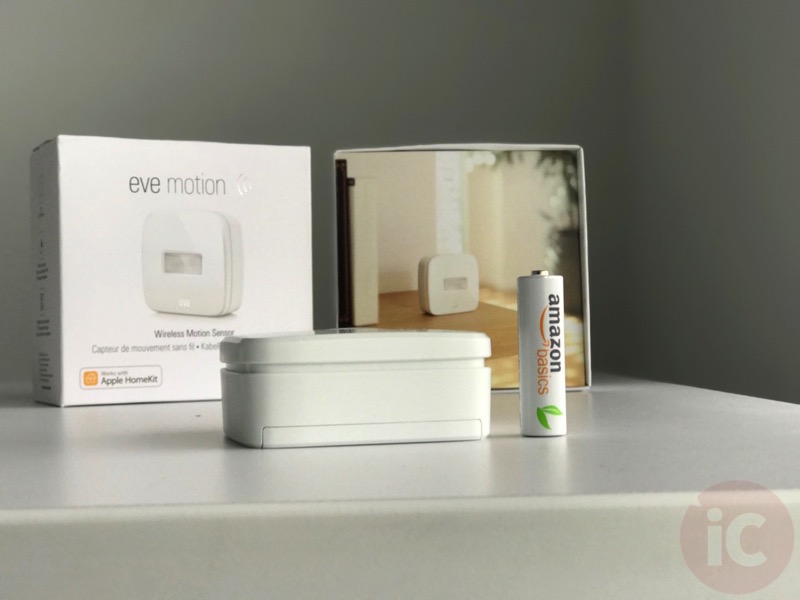 Pairing the Eve Motion to your HomeKit setup is very easy. First, just download the Elgato Eve iOS app, launch it and go to Add Accessory. The app will detect the Eve you’ve just inserted batteries into. 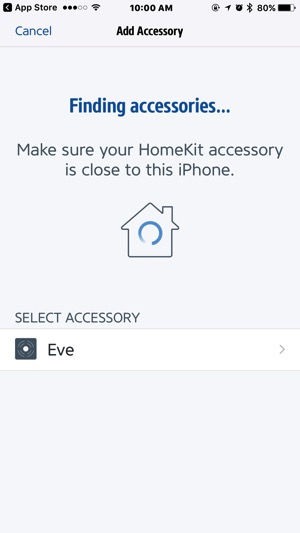 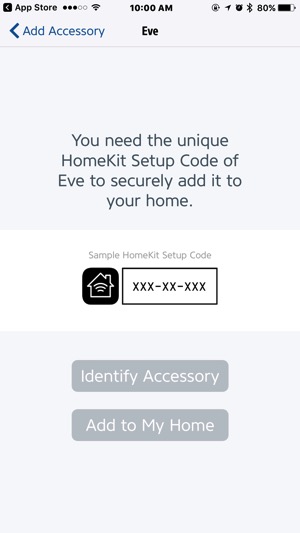 As with adding any HomeKit device, you’ll need to enter the setup code, located on the back of the unit (and on the instructions booklet). Using the iPhone camera here is quick and easy: 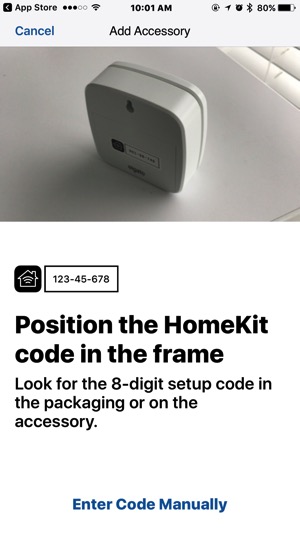 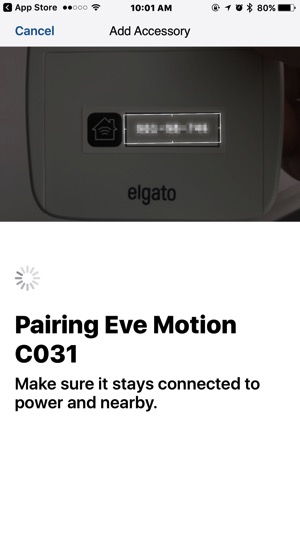 The next step will ask you to choose a room for your Eve Motion. We selected Home, our default room. You can also name your motion sensor as well: 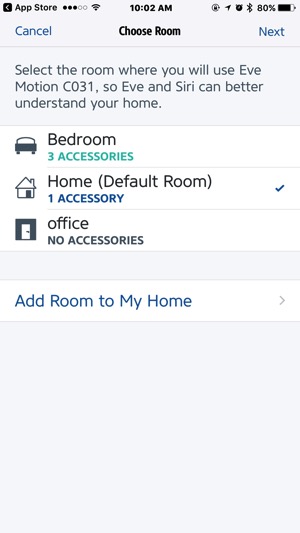 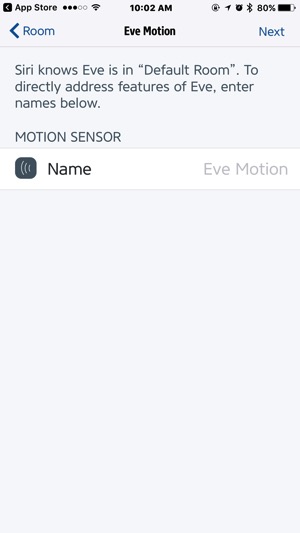 Next, you have options to set sensitivity levels of the Eve Motion, choosing from low, medium or high. After that, you can set Duration rules for your motion sensor, to help with your scenes. This is handy if you want your sensor to help you turn off a lamp after a specific duration of inactivity. 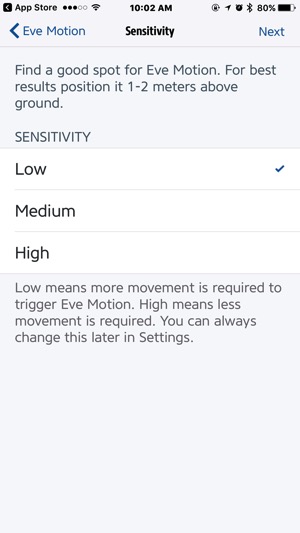 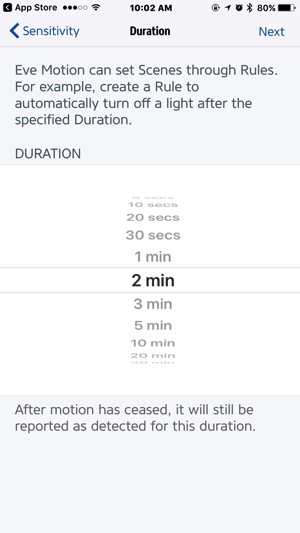 In our test, we wanted to use the Eve Motion to detect when we were in our living room, which would then power on the Koogeek HomeKit smart plug, which our lamp was plugged into.

To setup an automated scene, launch the Home app, then tap the Automation tab. Tap on ‘Create new Automation’, and then ‘A Sensor Detects Something’: 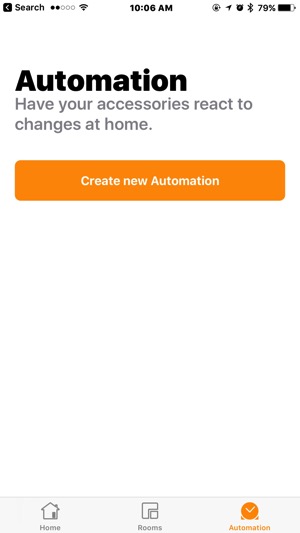 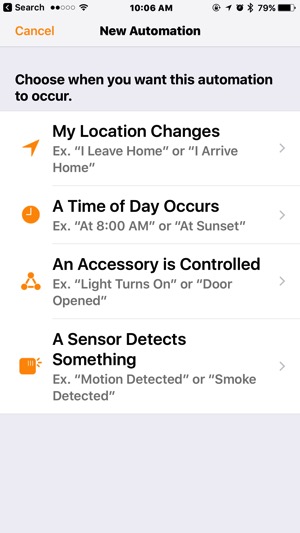 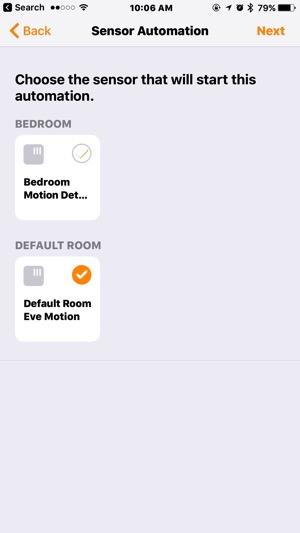 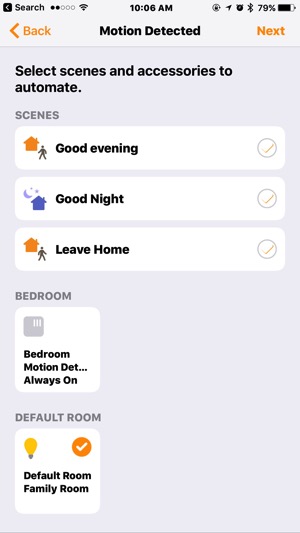 You have options to set when you want your motion sensor to function, such as either always or ‘Only after sunset’: 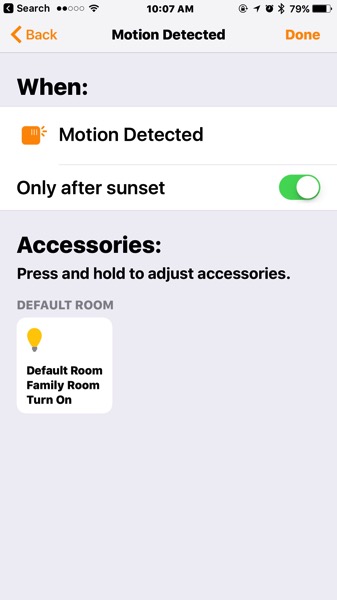 Now, we also had to setup a scene to turn the lamp off: 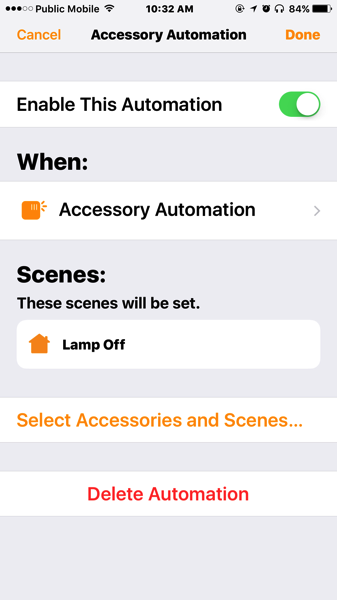 With our automation scene set in place, we then positioned the Eve Motion in our living room in the corner of our built-in shelving. The sensor did its job and powered on our Koogeek HomeKit smart plug, which our lamp was connected to, thusly lighting up the room. Voila! 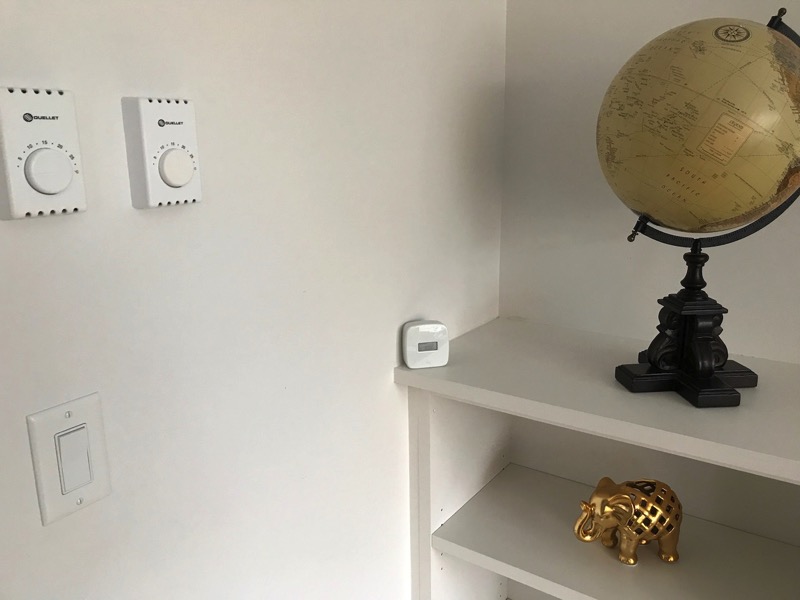 But, the Eve Motion is not exactly perfect. The issue we had was the unit takes 2 seconds to react with its passive infrared sensor, which is too long in our opinion, since it’s not exactly instant. But if you are aware of the two second delay, you don’t notice it after a while once you walk into the room.

Also, for the Eve Motion to turn off our lamp automatically after motion ceased, we had to create a second rule linked to a second scene we created in the Eve iOS app we named ‘Living Room Lamp Off’. This information is not in the instruction manual, but rather detailed in a company blog post.

First, you need to create a new scene in the Eve iOS app to turn off your lamp or HomeKit smart plug. Just go to the Scenes tab along the bottom, tap on Scenes tab up top (yes, it can be complex), then Edit, then Add Scene. From here, tap Add Actions, then select a room or Power type. We selected Home (our default room), enabled the Power tab, then selected the value to OFF. You can then name the scene, select an icon and save it.

Once that’s done, you need to create a new rule to apply to this new scene. Tap the Scenes tab along the bottom, go to Add Rule, then select Triggers. 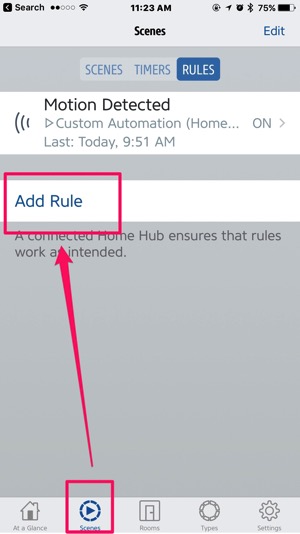 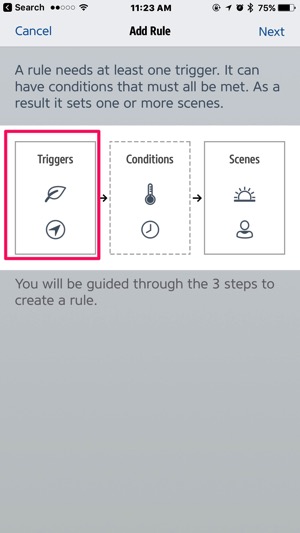 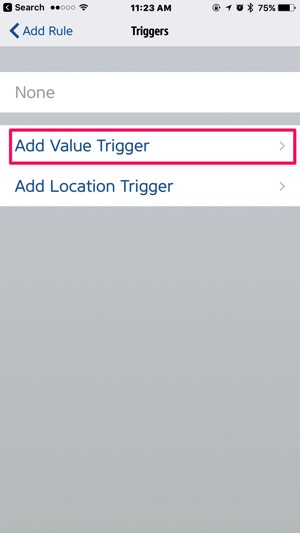 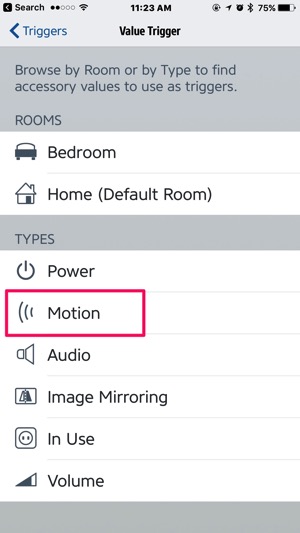 Next, select Eve Motion to ON, and set the Trigger Value to ‘Specific’ and ‘Clear’. We then selected the rule to apply to the scene ‘Living Room Lamp Off’: 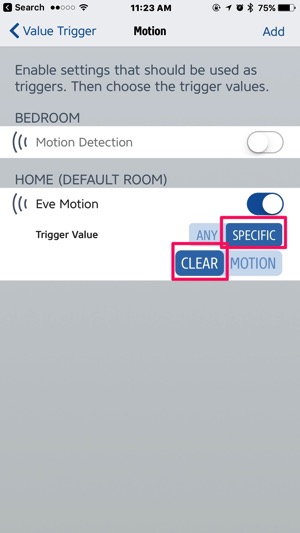 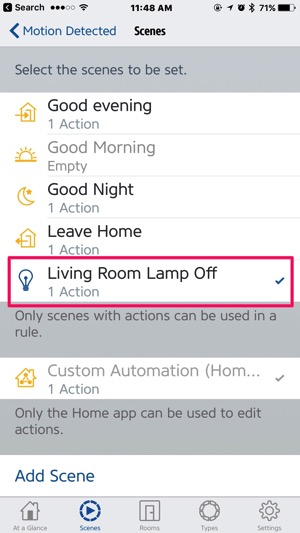 The final Rule Name for ‘Lamp off’ should look as follows: 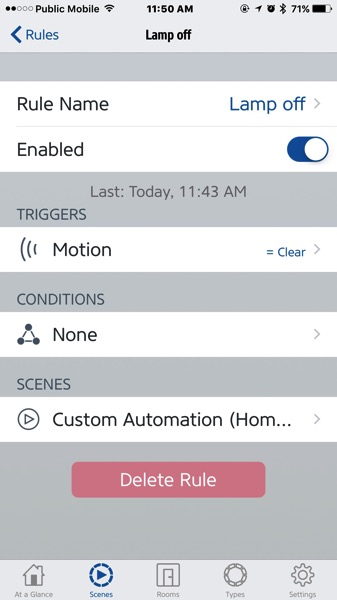 With this in place, after the duration of 20 minutes (which we set) of inactivity detected, our lamp turned itself off. 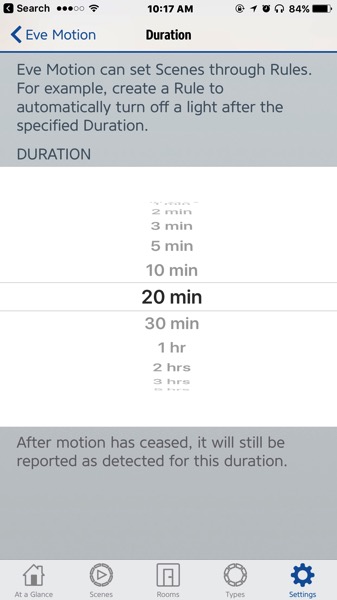 Overall, the well-designed Eve Motion is a compact and relatively discreet weatherproof motion sensor you can place anywhere in or outside your home, that takes simple AA batteries. We would have liked the sensor to process motion faster than two seconds and also allow for easier setup of scenes.

As for price, the Canadian dollar doesn’t help the Eve Motion’s $69.95 local price tag (vs $50 USD). But if you’re looking for a HomeKit motion sensor, and absolutely need automated scenes, the Eve Motion can do the job, if you take your time to setup event-based scenes and rules. You can start to get pretty creative with your HomeKit devices with the Elgato Eve, establishing triggers based on time, location or value.

The Eve Motion requires iOS 10.2 or later on your iOS devices. For automation, you will require an Apple TV 4, Apple TV 3 or iPad updated with the latest software updates. Learn more about the Eve Motion here. We’ll have more hands-on with Elgato Eve HomeKit products soon. Stay tuned.