It’s a good time for iPhone owners on twitter. Back in the early days, twitter apps were good but now they’re great. The evolution of iPhone twitter apps continue to make me smile as using twitter becomes easier.

If you haven’t heard of Hootsuite, you should have by now (it won Mashable’s Best Open Web Twitter App Award. The Hootsuite team is based in Vancouver and It’s one of the best web browser-based twitter apps available. Recently, they launched their highly anticipated iPhone app, and today we’re going to take a quick look at what it offers compared to other iPhone twitter apps.

The cool thing about Hootsuite is that if you’re an existing user, you can just login with your Hootsuite credentials. That means if you’ve already added multiple twitter accounts online, they will seamlessly appear on the iPhone app. The user interface is extremely familiar to the web app. Nothing new here, but everything looks great and works exactly as you expect it to. 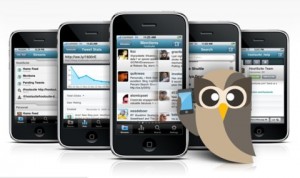 What I like about the Hootsuite app is that you can easily swipe left/right to move across your All Friends, Mentions, and Direct Messages timelines. Also, to refresh any column, all you have to do is drag your finger down and release to refresh (a la Tweetie 2). A message will quickly flash at the top of columns telling you the number of new tweets.

Also, the functionality to schedule tweets for the future right on the iPhone is just awesome. Plus, there are stats for your tweets when you shorten your URLs with ow.ly. Hootsuite makes tweeting very simple and easy, right from your iPhone. Say hi to these fellow iPhoneinCanada.ca twitter fans! 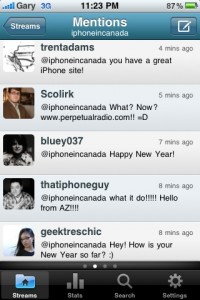 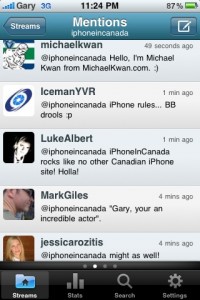 A few shortcomings to note though. There are no Push Notifications with the Hootsuite iPhone app. There is no way to follow conversations, or “reply all” to selective people within your list, like SimplyTweet. There isn’t a shortcut for the hashtag symbol and no ability to save draft tweets for later. Also, no option to use other URL shorteners like bit.ly or Posterous support. It’s safe to say that Hootsuite is not for the power user, but it will work nicely to be used alongside your favourite iPhone twitter app for scheduling tweets.

Okay, so of course we can’t have the perfect iPhone twitter app, but for those hooked on Hootsuite’s web application, you’re going to really enjoy Hootsuite on the iPhone. It’s exactly the same and offers everything you’ve become familiar with. That being said, I can see Hootsuite adding more features with future updates.

Hootsuite is available from the iTunes App Store for $1.99, still on special!