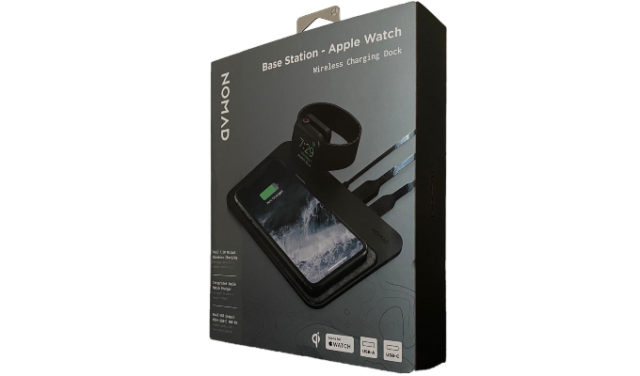 While Apple has yet to release the long-awaited ‘AirPower’ wireless charger, the Santa Barbara-based Nomad has a very suitable alternative for your home space or office. Nomad’s ‘Base Station Apple Watch’ Edition is an elegant wireless charger fit for iPhones, AirPods, and of course, Apple Watch.

While other similar products exist on the market, many are primarily focused on charging one device. Nomad’s Base Station is built to charge upwards of three devices at a time. In addition, the charger possesses a reliable build quality and style. 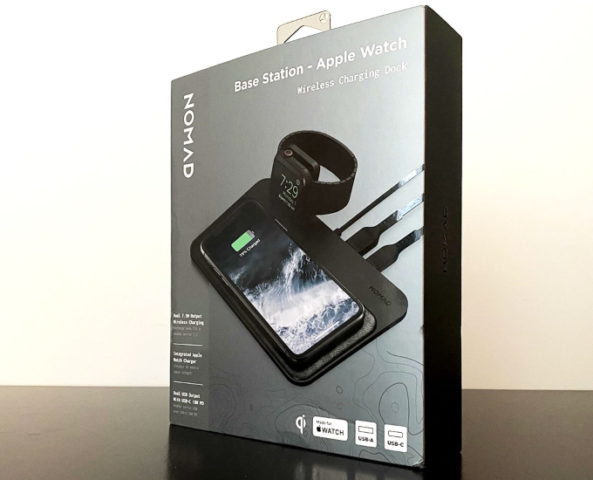 Opening up the Nomad Base Station Apple Watch Edition box, you’ll find the wireless charging unit ready to go. Included is the AC adapter, three regional charging plugs (which is convenient for travellers or overseas customers). Truthfully, the AC adapter is a bit on the bulkier side, but I suppose it’s par for the course for a wireless charger this size. The charger also integrates USB-C and USB-A ports. Additionally, Nomad includes a small note outlining its three-coil charging system.

The design of the Base Station is one of my favourites thus far. It’s designed with an anodized aluminum body with a bed of padded leather where the iPhone or AirPods are intended to lay. Underneath the pad is three Qi-certified charging coils. One is located on the left, another on the right, and the last in the middle. The placement of each coil allows users to lay their phones perpendicular across the padded leather bed. However, should a user want to charge their AirPods and phone at the same time, the orientation of the phone’s placement can be changed to accommodate both devices. The bottom of the device is made of plastic with two strips of non-slip material so your charger doesn’t slide around.

On the rear of the Base Station is an elevated dock specifically designed for the Apple Watch. As iPhones and AirPods are to be charged on the bed of the Base Station, an Apple Watch can be mounted onto the integrated MFi-certified Apple Watch charger. At first, I was worried about how reliable the dock was. Upon further inspection and use, the build quality is spectacular. On the bottom of the dock is a small bumper designed to keep the Apple Watch from scratching on the main unit. The downside to the Apple Watch dock is that it does prevent two iPhones from sitting vertically on the unit at the same time. 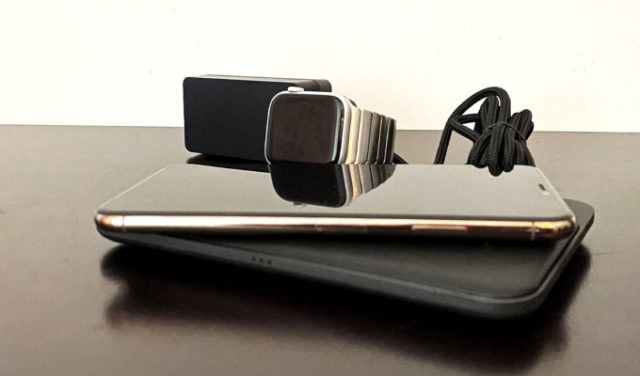 Set up is a breeze. You’ll only have to plug the AC adapter into the unit and find the charger a home around your house. As I have used a number of wireless chargers previously, most have been compact in the event of wanting to transfer it to a different room or take it while travelling. While the Nomad Base Station is not heavy or cumbersome by any means, you may opt to find it a permanent home, be it bedside table or desk. Due to the Apple Watch dock, it’s clear that the Base Station Apple Watch Edition isn’t meant to be your go-to travel companion. Had the Apple Watch charger been foldable or removable, it’d be a different story.

I’ve now been using the Nomad Base Station for two weeks. It’s found a nice home in the living room and used when I can step away from my phone during the evenings. Putting the charger through the wringer, I mounted my Apple watch and placed my iPhone XS Max on the unit to charge simultaneously. Just as designed, both began charging right away at a fairly respectable speed. The 7.5W Qi-certified coils are able to “fast” charge an iPhone.

It’s a great addition to have a designated dock for the Apple Watch. There’s no hassle involved when placing an iPhone down and having to make room. A nice quality of life feature is that an iPhone can be charged with the case remaining on. Additionally, Nomad has included a series of small LED lights on the front of the Base Station. The three LEDs will illuminate once a device is being charged by one of the corresponding coils. At night, the Base Stations’s ambient sensor will reduce the lighting if you decide to have the unit next to your bed.

If you’re thinking of cutting the cords from your Apple Watch and iPhone chargers and transitioning to a wireless world, Nomad’s Base Station removes a lot of the hassle that comes along with having to perfectly position your phone when charging. That being said, we’re still waiting to see what Apple’s AirPower will bring to the table. Once we’re able to see what first-party innovations Apple has in mind, we’ll have a better idea of how it’ll stack against the Nomad’s charger.