Tweetie has become one of the most popular iPhone twitter apps. People were more than willing to buy it for the slick interface and intuitive features (but it still lacks Push). Last month, Atebits was sold to twitter and founder Loren Brichter started focusing his efforts towards making the “official” twitter app based on Tweetie. This would mean tweetie would soon become FREE.

The Twitter iPhone app went live yesterday in the App Store. It’s based solely on Tweetie 3 and is absolutely free. What a great deal for those looking for the best free twitter app on the iPhone. Here are some details: 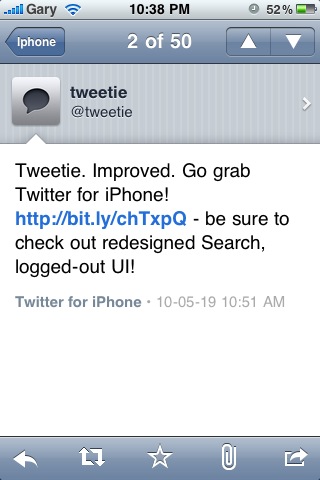 After using Tweetie to test it out, the app is pretty slick but I’m still going to be using SimplyTweet 3 for my twitter needs. Also, I find the icon to be butt ugly. Couldn’t they have come up with something more creative? Nevertheless, the twitter iPhone app is pretty awesome considering the app is FREE. How do you like it so far?