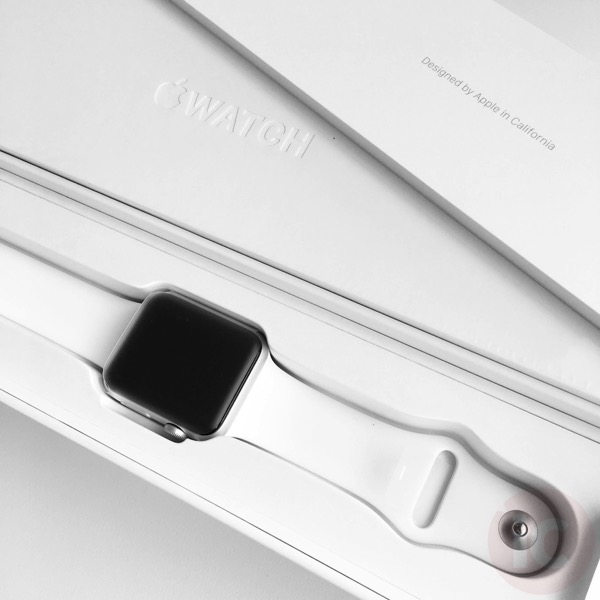 Aside from these new additions, Series 2 looks the same as the original Apple Watch, with the bands still interchangeable between both models. The original got a dual processor upgrade and was renamed to Series 1, along with a slight price drop. 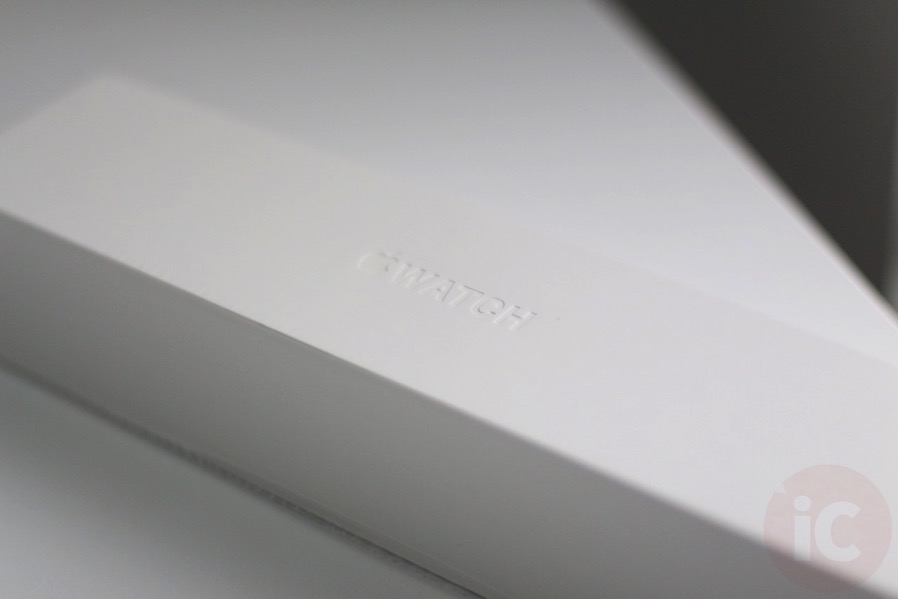 We’ve been using Apple Watch Series 2 in the silver aluminum body in 42mm with white sport strap since launch day. We wanted to put the new features to the test and see just how much of a difference this watch fared against the original, mainly when it came to fitness tracking. 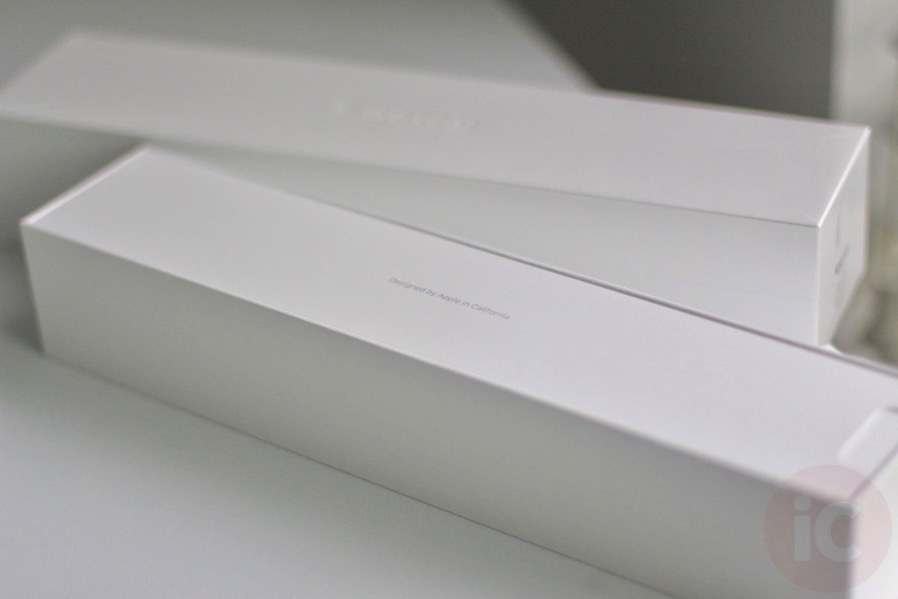 If you already own an Apple Watch, unboxing the aluminum Sport model is pretty much the same. The box comes with an extra S/M band to accommodate those with smaller wrists. The Apple Watch unboxing experience for the Aluminum Sport models is still very nice, as the cardboard box has some weight to it, making it feel justified spending $529 + tax for a smartwatch (sort of, but not really). 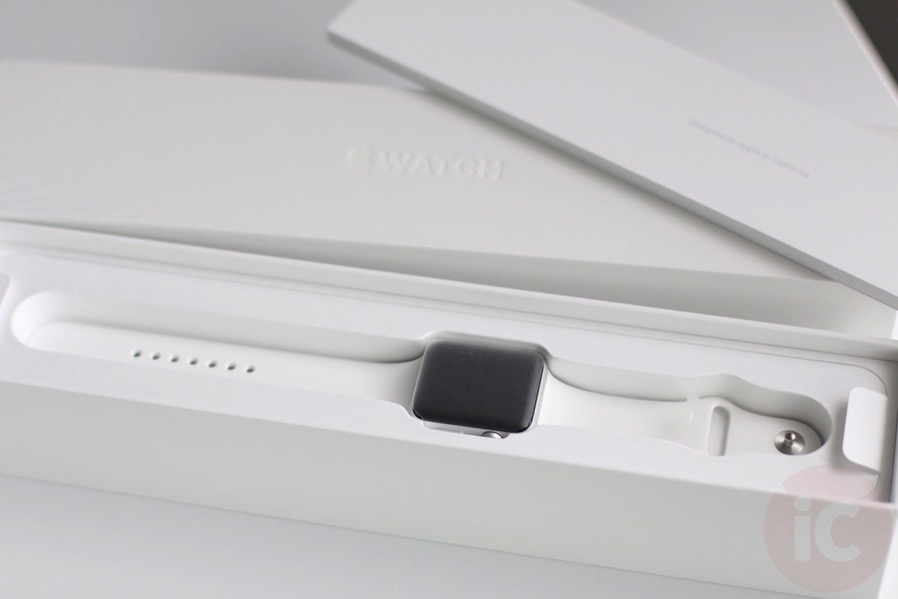 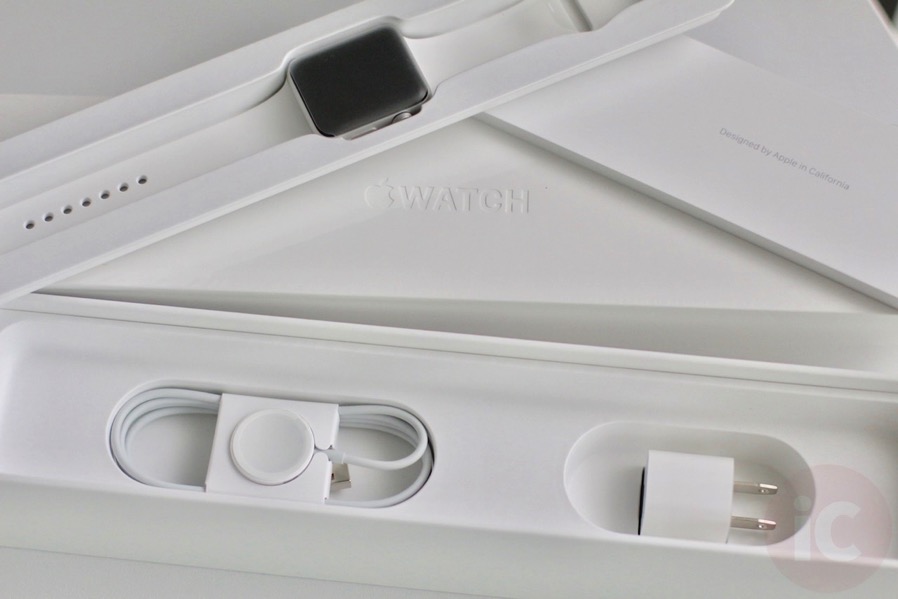 As you can see, you get the Apple Watch magnetic charging cable (it’s extra long) plus a USB AC adapter to charge your watch. You’ll most likely want to invest in an Apple Watch stand (we’re using Belkin’s PowerHouse).

The first thing we noticed after putting on the Series 2 was it looked slightly thicker versus the original. In our image comparison below, you can spot the different easily: 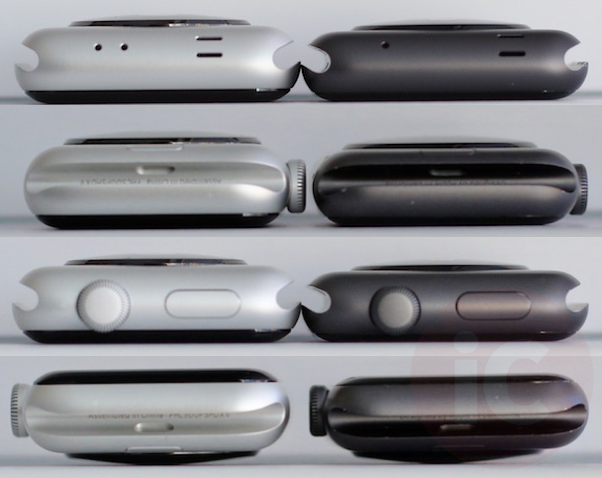 As for the new display, it now is able to display up to 1,000 nits, twice the brightness compared to before. To our eyes, it was hard to notice the difference, but if auto-brightness is on, that’s when the screen will ramp up its brightness outside in sunny conditions. But indoors, we couldn’t really tell that much of a difference versus the original Apple Watch.

Performance-wise, Apple Watch Series 2, with its dual-core processor upgrade plus watchOS 3, feels much snappier versus the original. While loading apps does still require some waiting (at least a couple seconds), it’s faster than the extreme lag times of watchOS 2 on the first Apple Watch.

With the original Apple Watch, I’ve used it to track the odd run or bike ride, just for the sake of having it log as a workout in the Activity app. But after a while, I stopped bothering due to the inaccuracy of the Apple Watch. I usually use Strava for iPhone during runs, and my Garmin Edge 520 for weekend road rides.

But what about Apple Watch Series 2 and its built-in GPS, versus the original Apple Watch? I took a chance to compare it to Strava for iPhone (using my iPhone 6s Plus GPS) for runs and my Garmin Edge 520 for road rides.

Here are some screenshots below for the run, with Series 2 on the left, and Strava using my iPhone on the right. You’ll notice the distance on Strava was a bit longer, since it auto-paused when I reached for the phone out of my pocket.

There are some differences, such as the Active and Total Calories and the Total Time, but for the most part, I’d say Apple Watch Series 2 and its GPS performed pretty well versus the iPhone’s GPS: 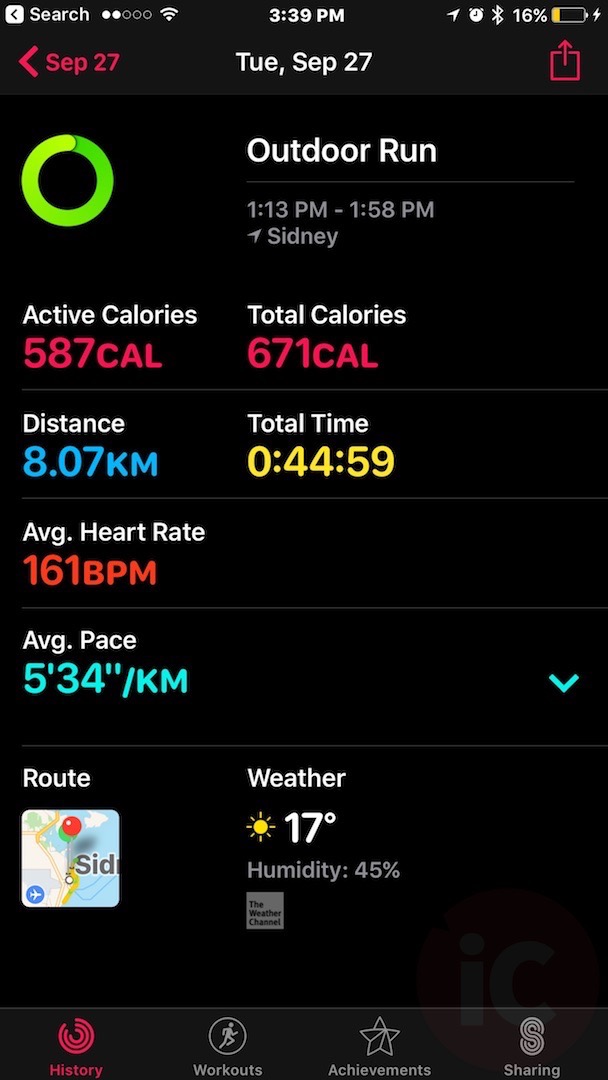 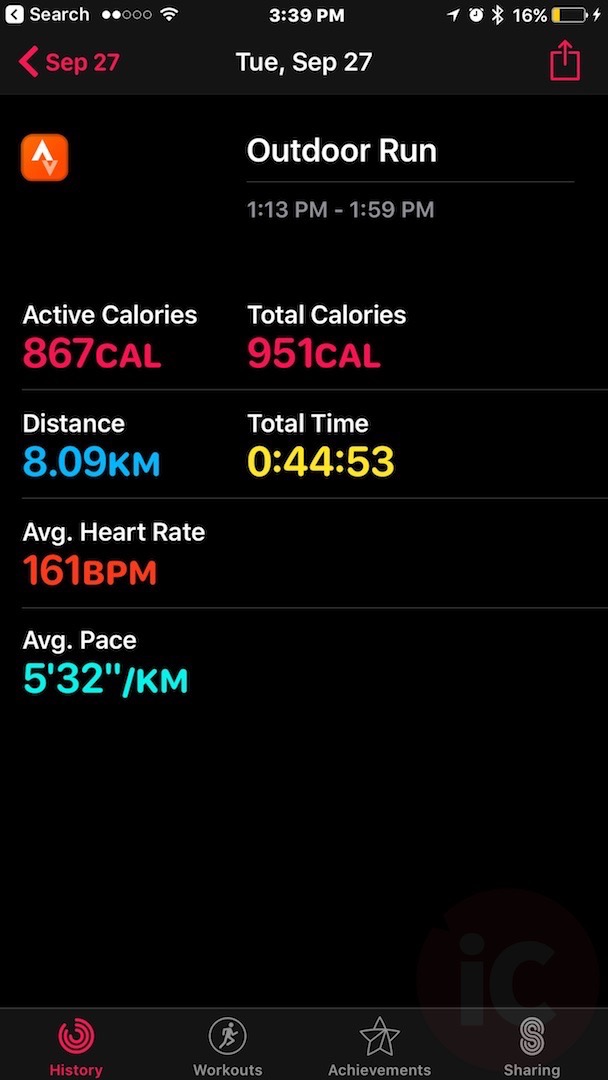 Here’s the road bike tests with Apple Watch Series 2 versus my Garmin Edge 520 bike GPS (my Garmin data auto uploads to Strava by the way), on a short test ride. The calories are closer matching here, but the distance and time are off (I stopped the Garmin first, then the Apple Watch), but not by a whole lot. As for Average Heart Rate (Strava data measured by my Garmin heart rate monitor) and Speed, I would say it’s within reason. 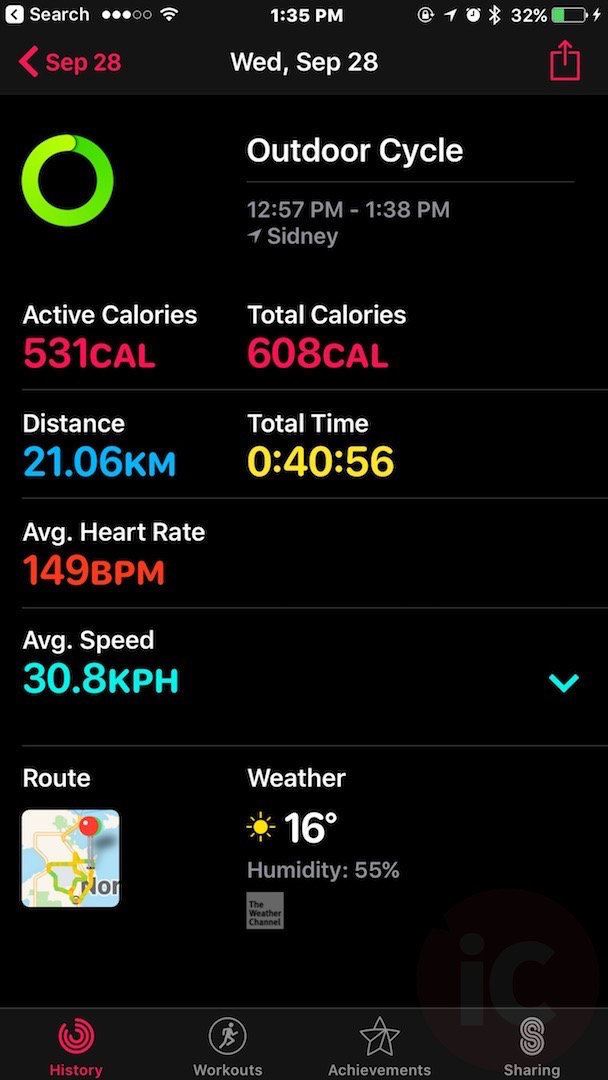 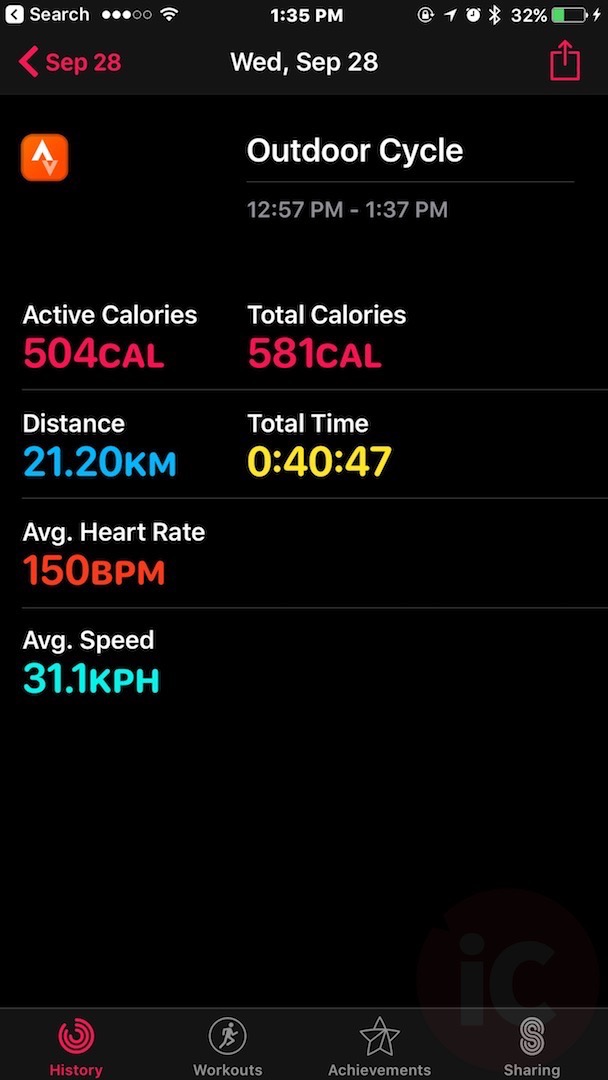 With Apple Watch Series 2, you’ll also now have your workouts plotted on a map thanks to the GPS. According to Apple, colours show variations in speed (not GPS signal as some have reported), which is fairly accurate, as the far green line on the left was where I was doing a short sprint: 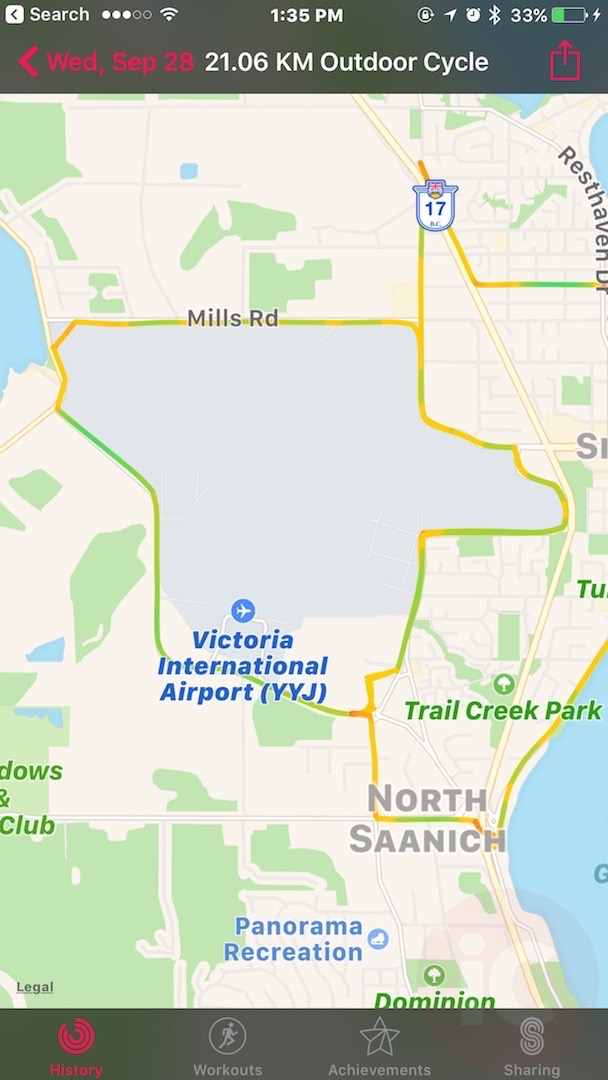 Cycling without my iPhone and just using Apple Watch Series 2 just isn’t possible yet, though ( especially on longer rides). I always carry my iPhone with me, for emergencies. Until Apple Watch gets cellular connectivity, I will forever be tied to my phone.

Yes, Apple Watch Series 2 is definitely water proof. I’ve showered with the watch on and washed it under the tap, which isn’t really pushing its water resistance properties to the limit. But I hope to test the Series 2 in the pool, soon (I’m more of a sinker, not a swimmer), to see how it really fares as advertised.

If you’re going to shower with Apple Watch Series 2, the company says “we recommend not exposing Apple Watch to soaps, shampoos, conditioners, lotions, and perfumes as they can negatively affect water seals and acoustic membranes. Apple Watch should be cleaned with fresh water and dried with a lint free-cloth if it comes in contact with anything other than fresh water.”

What’s really cool is how Apple Watch Series 2 ‘ejects’ water from its speaker. When you start a swim workout, Water Lock enables to disable the touchscreen from accidental taps. To exit Water Lock, you turn the Digital Crown and Apple Watch will emit a series of beeps to push water out of the speaker cavity. You can also activate Water Lock manually by swiping up from Control Center at any time.

I wore Apple Watch Series 2 and Apple Watch simultaneously for a few days (on the same wrist), looking like a real winner. At the end of the day, battery life, I would say, remains about the same or slightly better (Series 2 has a bigger battery; iFixit said the 38mm battery has 33% increased capacity). GPS use most likely negates the increase in battery size.

The bottom line, by the time we put our Series 2 down in the charger every night, we always hover around 50% battery life remaining or so, which is pretty decent. But workouts and GPS use will run the battery down more than just a regular work day. Either way, we rarely run into battery anxiety with Apple Watch.

Should you buy Apple Watch Series 2?

If you’ve never owned an Apple Watch and to track your activity for better health, yes, Series 2 is finally calling your name. You missed out on being an early adopter and your patience has paid off with new upgrades such as dedicated GPS, water resistance, a brighter display, larger battery, extra microphone, and the option to purchase a Nike+ edition (which we’re going to get instead of this ‘boring’ aluminum model). This is the watch you probably were hoping for the first time around.

For existing Apple Watch users—should you upgrade? I’d only do it if you’re a fitness freak and want to be able to track runs without being tethered to your iPhone, and have a watch that can track your swims in the pool.

Otherwise, if you’re a sloth, watchOS 3 actually breathes a new half-life into your 18-month old Apple Watch. It’s not as fast as Apple Watch Series 2, but you can notice a slight difference, plus you get more customization features, when it comes to watch faces and complications.

The bottom line? I still enjoy my Apple Watch as it’s the best way to receive and reply to notifications from iPhone, while it seamlessly integrates into Apple’s ecosystem (sadly, it cannot unlock my aging 2012 MacBook Air’s older Bluetooth), and the GPS latches onto satellites quickly to track fitness well.

The only problem? It’s not exactly ‘cheap’ compared to other trackers like those from Fitbit, but the design looks better than anything else out there.

Apple Watch may not have cellular capabilities yet (who knows when it’ll come), but Series 2 may hold you off until the next upgrade cycle, for now.