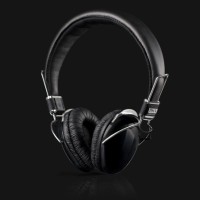 If you’ve never heard of RHA, don’t feel bad. When I received a pair of their SA950i on-ear headphones I’d never heard of them myself. And yet, after spending a couple of weeks using them, I’d suggest it’s a name worth knowing. Based in the UK, RHA (a division of Reid Heath) spent 3 years on research and development before launching their audio products in 2011 via a number of resellers including the Apple Store and Amazon. Now, their products are available in Canada and we were asked to take a look at their offerings.

As a long time user of Bose OE headphones, I was curious to see how the SA950i would compare, so I switched for a couple of weeks. I have to say, considering that the SA950i headphones cost approximately 1/3 of the Bose OE, they compare pretty well. Of course, this review isn’t intended as a comparison of the two, so let’s move on. 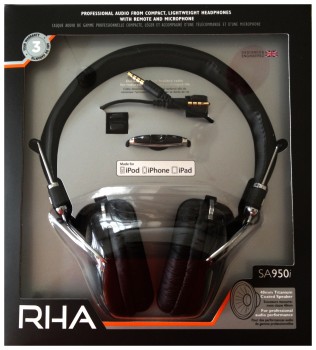 The first thing you’ll notice when you unpack the SA950i is how light they are. Weighing in at only 105 grams, and featuring technologies more commonly found in full-sized studio equipment, these feather weight headphones pack a punch via their 40mm titanium coated mylar drivers. The detachable braided fabric cable helps eliminates tangles and can be replaced if required (and as it uses standard size headphone connections on both ends, could be replaced with a wide variety of cables). The SA950i feature an inline 3 button remote / microphone (compatibility listed here), and their gold plated connections “maximize contact efficiency” according to RHA. The earphone cups themselves are well padded and are attached to adjustable chrome sliders that allow for a secure and comfortable fit. I personally found them a touch difficult to adjust to my ears, but odds are that’s just me and my huge cranium. In my use with both an iPhone 4S and iPhone 5 I found the in-line remote to work very well, supporting all the expected features such as play, pause, skip forward, skip backward, answer call, and activate Siri. Audio quality when using the microphone was good, and I had no issues when making phone calls or speaking instructions to Siri. 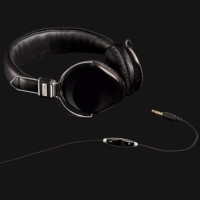 According to RHA, the SA950i is “engineered to produce studio quality sound in a portable unit” by “utilizing 40mm titanium-coated drivers and powerful neodymium magnets to reproduce the full audio spectrum with fidelity and precision”. In my daily use while listening to a variety of podcasts and music, I found the SA950i to generally sound quite good for a $60 pair of on-ear headphones. They do a respectable job of reproducing bass, although I found the mid-range to be a bit less distinct than I prefer. However, as audio preference is a very personal thing, your experience will no doubt vary. The SA950i are a very stylish looking product, with glossy black earphone cups and attractive chrome highlighting the overall effect. The headband appears to be solid and well made, with comfortable padding over the top of your head.

Launching in Apple Retail Stores at the end of October, the on-ear SA950i will cost $59.95 CAD. The headphones feature a 3 year parts and labour warranty and carry the Apple “Made for iPhone/iPad/iPod” certification. RHA also offer the RHA MA450i noise isolating earphones, so stay tuned in the next week or two for a review of that model as well.

What do you think? Are you looking for a pair of on-ear headphones for under $60? If so, does the SA950i look like a product you would consider?

Let us know in the comments.