The Deco M5 Whole-Home Wi-Fi System launched last month in the U.S. and today marks the official debut in Canada, with Best Buy as their exclusive launch partner. Each unit is powered by a quad-core processor and the AC1300 system can provide throughput speeds of up to 400 Mbps on the 2.4Ghz band and up to 867 Mbps on the 5Ghz band, while also supporting MU-MIMO data streaming. 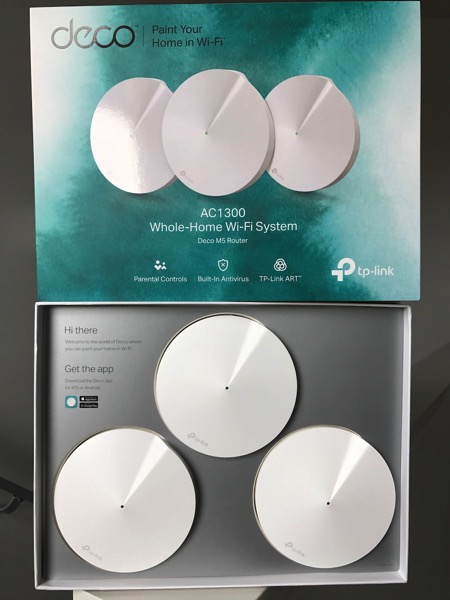 We’ve had the chance to test out the Deco M5 from TP-Link over the past few weeks, so here’s a quick unboxing and review of our experience.

As you can see from the image above, in the box you’ll see three identical disc-shaped router units in a clean, white design. 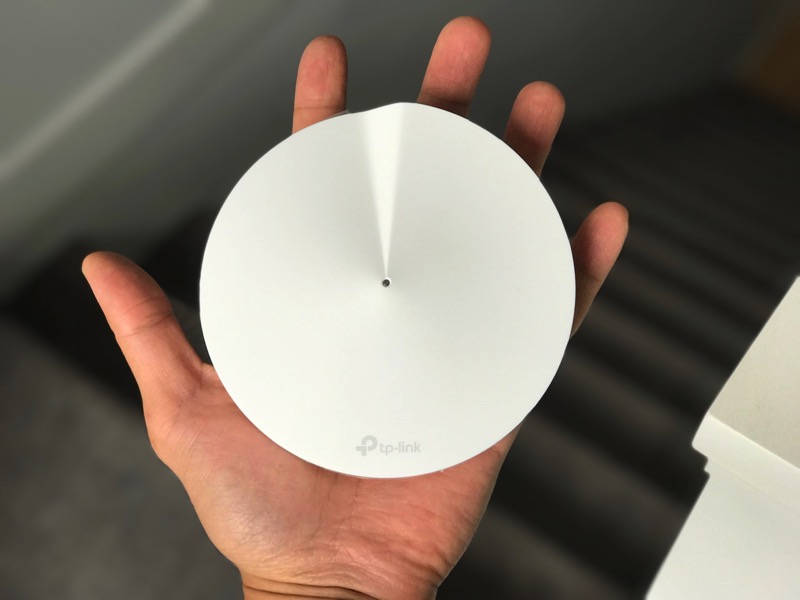 The top of the unit sits an LED, which will show green (everything is good), amber (rebooting and not connected), red (which means something’s wrong) and blue (setup mode). The units have a USB-C port for power and two ethernet ports. The first unit connects via ethernet to your Internet provider’s modem, then the other two can just be plugged into an outlet to complete your mesh Wi-Fi setup, which occurs over Bluetooth. 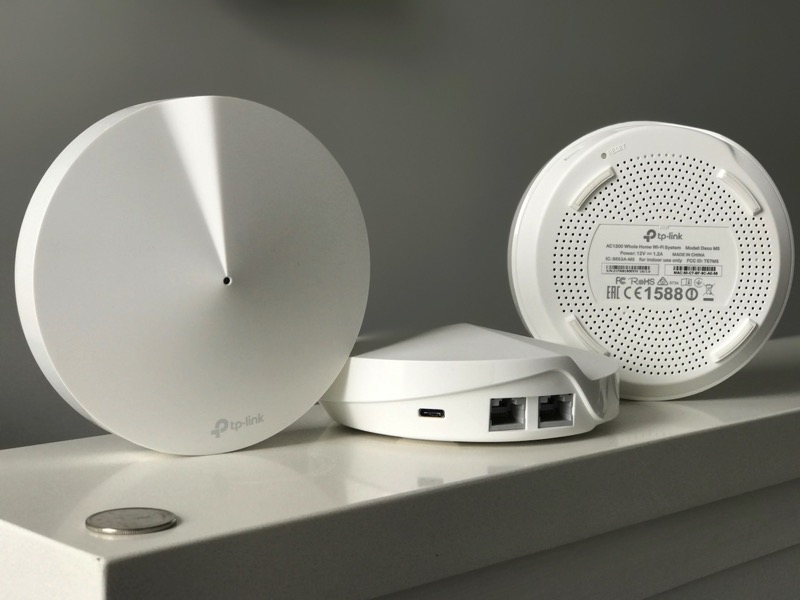 In the box, you’ll get instructions, an ethernet cable plus three AC adapters for each puck-shaped router: 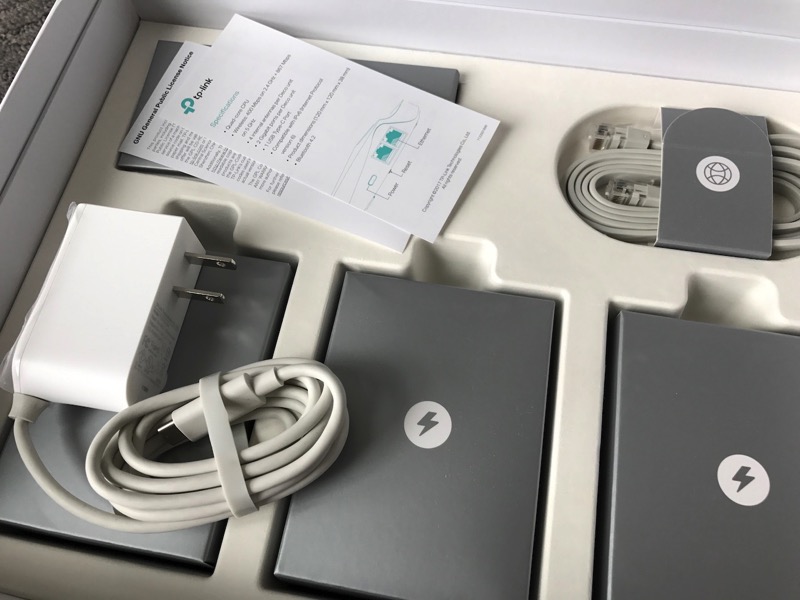 The setup of the Deco M5 takes place over the Deco iOS app and Bluetooth, as there is no web interface for all you network nerds out there. Personally, I hate dealing with the web browser to setup my network, as I like simple and easy graphical user interfaces.

After installing the Deco iOS app, it does a pretty decent job of ‘holding your hand’ through the setup process. This is something that your non-tech savvy parents could follow along to, as the instructions include decent visuals on what you need to get started. 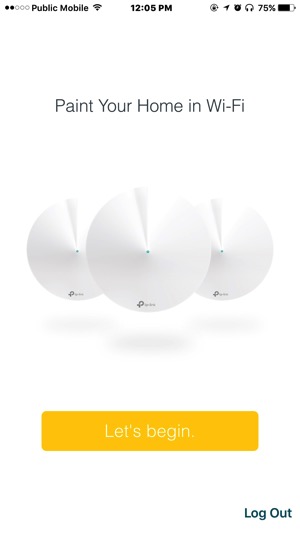 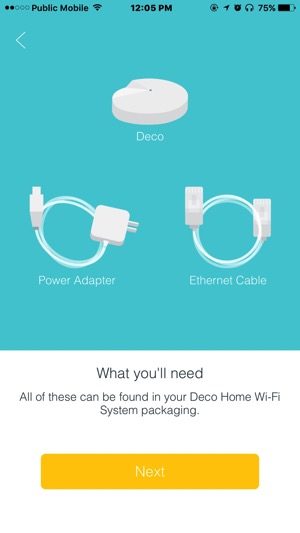 The first step was to plug the AC adapter into the power outlet, then an ethernet cable from my Shaw cable modem into either port on the Deco, and power both on at the same time: 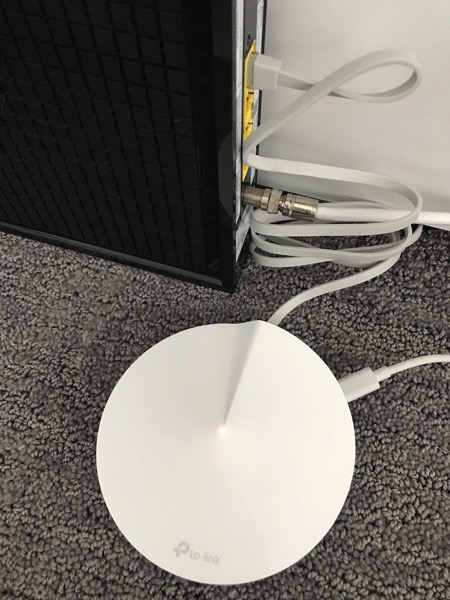 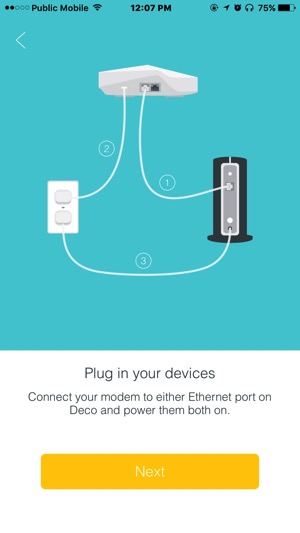 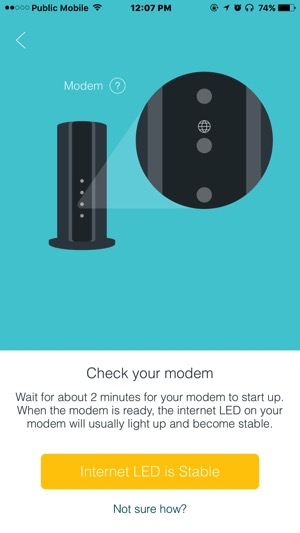 The app does a pretty decent job of guiding you along the way. Our Deco unit was flashing blue but it wouldn’t connect at first. A second try and we were up and running (we unplugged and plugged the unit back in): 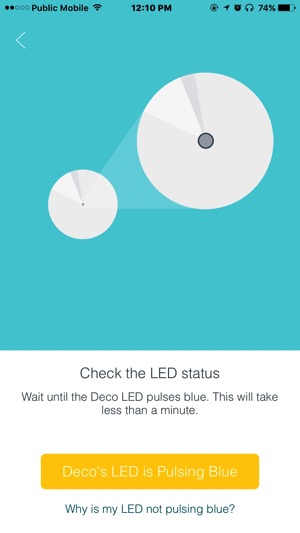 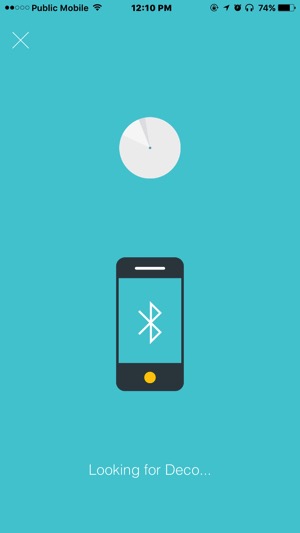 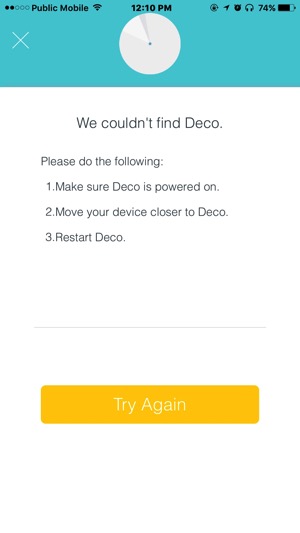 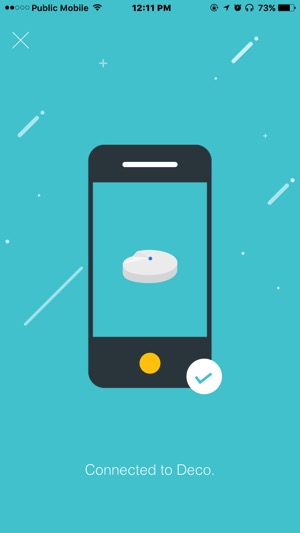 Once the Deco was connected to my iPhone, the app began getting the router online to the Internet: 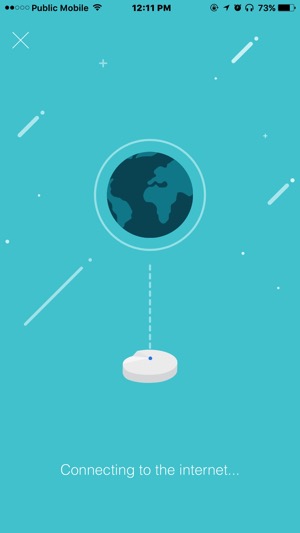 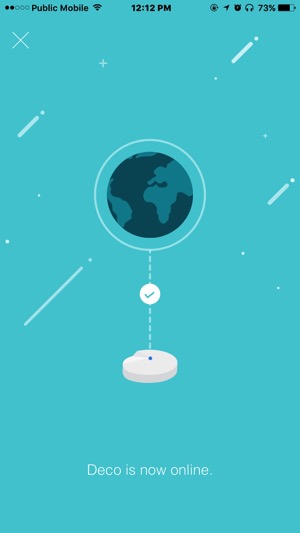 Next, we created our Wi-Fi network: 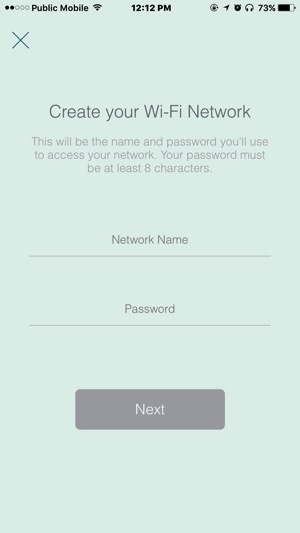 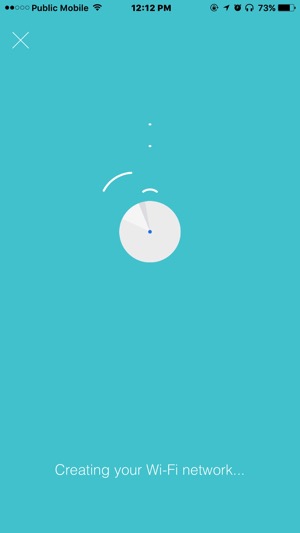 Once that was done, we had an option to add another Deco unit, which again we had an issue with. A software update presented itself so we proceeded to install it: 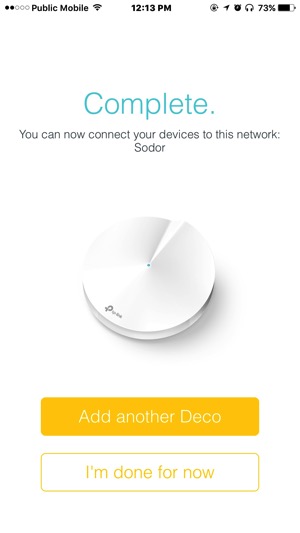 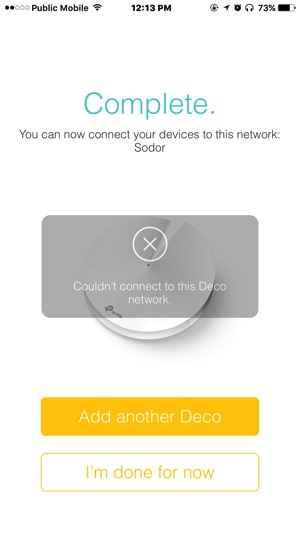 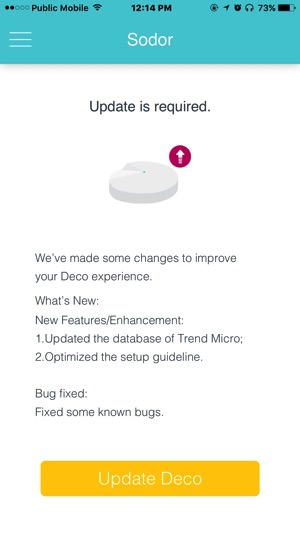 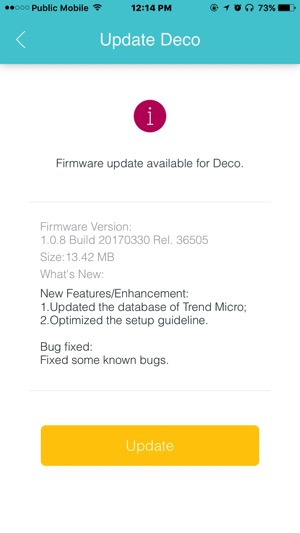 The update process is very smooth and it guides you along the way about the progress. You’re supposed to keep your Deco powered on and in range: 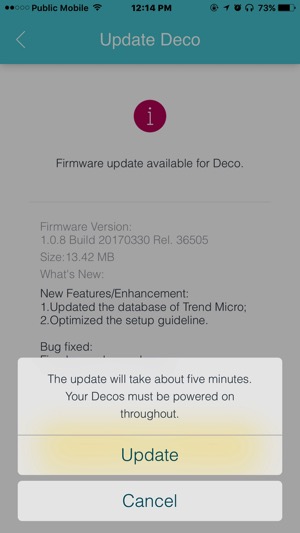 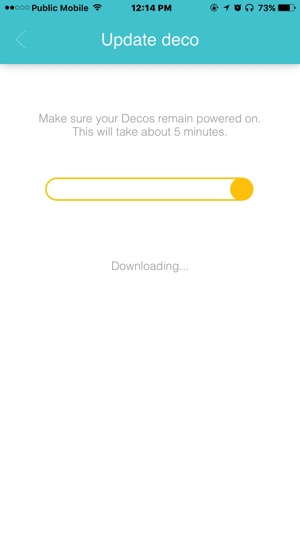 Once we updated our firmware, we tapped ‘Add’ to add our second and third Deco units to the network. These units just need to be plugged into AC power and within range of each other: 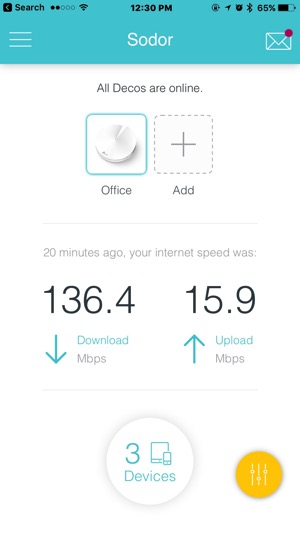 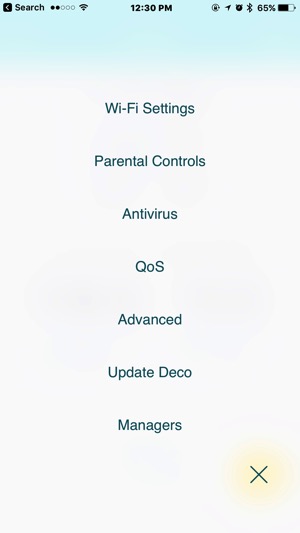 When you tap on the yellow settings icon, users are presented with the following settings:

TP-Link says their three separate AC1300 units can offer mesh Wi-Fi coverage of a home up to 4500 square feet. We performed our speed tests in a 1600 foot two-level townhouse and our Shaw Internet 150 plan was performing very well under the Deco M5 setup, offering speeds beyond advertised: 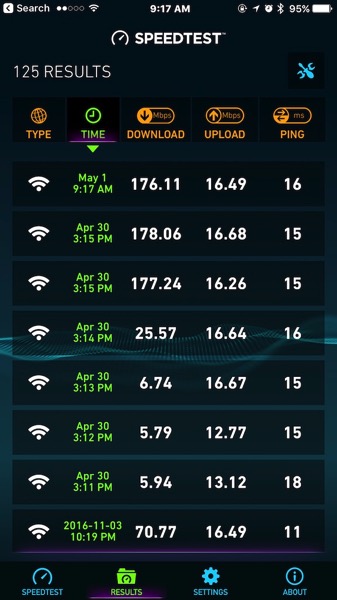 We also performed a separate test in a 3000 square foot home with all three Deco units installed. We were able to consistently get around 150 Mbps via the Deco app (which uses Speedtest.net), even when we had just two units setup (and 7 devices connected). A test using Netflix’s Fast.com confirmed these speeds, as back-to-back tests showed speeds of 140-150Mbps. 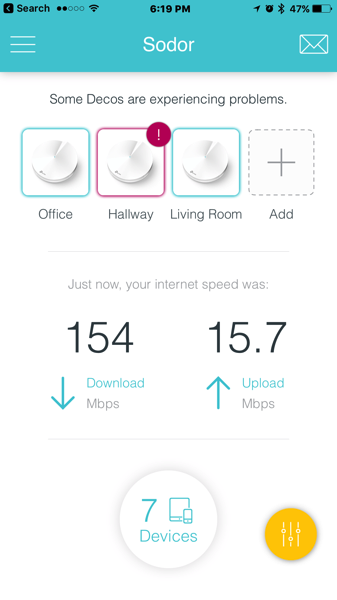 While we did encounter a couple hiccups during setup to get each unit online, once connected, we were able to take full advantage of our Shaw Internet 150 speeds throughout our home. The lack of a web setup interface may be an issue for hardcore network enthusiasts, but for those who like step-by-step solutions, the iOS app does a good job of guiding you through every step of the way.

The TP-Link Deco M5 Whole Home Wi-Fi System and its three-unit multi-pack is available today at $449.99 CAD at Best Buy (saving $90 versus buying individual units). Single packs will soon reach other retailers for $179.99 CAD each.

At a cost of $449.99, a mesh Wi-Fi system is an investment as it isn’t exactly cheap. But if you’re looking for complete coverage in your home, a simple interface for setup via an iOS or Android app, plus the option to control Internet profiles for family members and utilize antivirus and malware protection from Trend Micro, the TP-Link Deco M5 is one mesh Wi-Fi system to consider, as it also has a clean design to match any home interior.

Sony is diving back into the virtual reality well with PS VR2 and I for one have been eagerly awaiting this new generation. The original PSVR showed a lot of promise but was held back slightly due to over-encumbering setup solutions and archaic accessories. PS VR2 feels like a fresh start not only for Sony...
Steve Vegvari
3 days ago

Since the advent of the PlayStation 5, I’ve been impressed with Sony’s new DualSense controller. It’s quickly entered the upper echelon of controllers as far as I’m concerned. Bringing haptics and adaptive triggers and leveraging comfort, the DualSense really elevated my experience in the PlayStation ecosystem. However, I’ve also long been a proponent of the...
Steve Vegvari
4 days ago