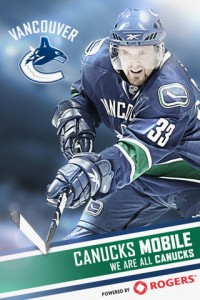 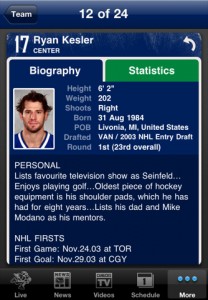 If you’re a Vancouver Canucks fan, you probably should have the official iPhone app. This new app now has Push notifications (I just got a reminder that the game was on) and some nice videos to keep any Canucks fan happy. There’s a schedule for games and even a map of Rogers Arena. This app is great for keeping up with everything to do with the Canucks.

There’s a live video section that feeds what’s happening at the game on the jumbotron. I tuned into the live feed, but ran into some intermittent network errors. I had audio but no video. Once it buffered, I was able to see fans waiting for the game to start at Rogers Arena. Cool. 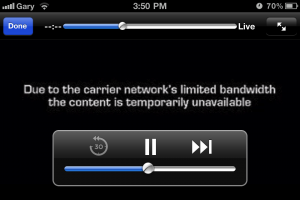 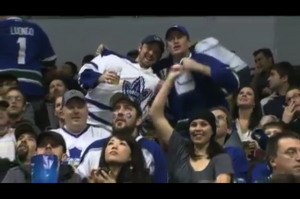 Also, there’s exclusive content–get this–for Rogers customers only (given that Rogers is the arena sponsor). Bonus! 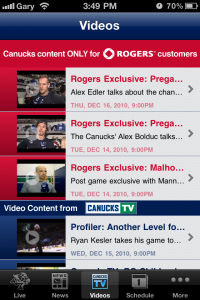 Get live box scores, video features, breaking news and much more with the Official Canucks App, powered by Rogers! Your favourite team is never more than a click away.

This free Canucks app gives you instant, one-tap access to exclusive photo galleries, live behind-the scenes video from the games, social media feeds, message boards, and player cards. Go inside the locker room for updates on the players, from the players.

Staying connected with the Canucks means never missing another goal, save or fight with LIVE updates on scores, stats and standings from the most comprehensive Canucks app available.

Download this app and get the following:
– Exclusive news, features and social media updates
– Photos from practices, games and behind-the-scenes
– Canucks.com and CanucksTV produced video, including interviews from Kristin Reid and behind-the-scenes video during games
– Canucks interactive schedule
– In arena virtual map â€“ locate your seat and the closest amenities
– Up to the second box scores, stats and standings, including interactive player cards
– Full access to message boards on Canucks.com

Tonight, Canada’s “other team” is in town for an early 4PM PST start. The Canucks will most likely clobber the Leafs–but, you never know what will happen in today’s NHL. But hey, this is Toronto we’re talking about! 😛 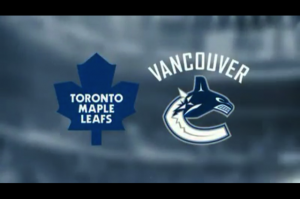 Who will win tonight? Vancouver or Toronto? Predictions on the final score? I’ll be watching the game with this Vancouver Canucks app in hand. It’s by far the best NHL iPhone app available.