Admitting the lack of an all-electric option, an Infiniti dealership in Sherbrooke, Quebec, has delivered a Tesla Model 3 to a loyal customer who wanted to go electric but couldn’t buy an Infiniti from his usual dealership (via Electrek). 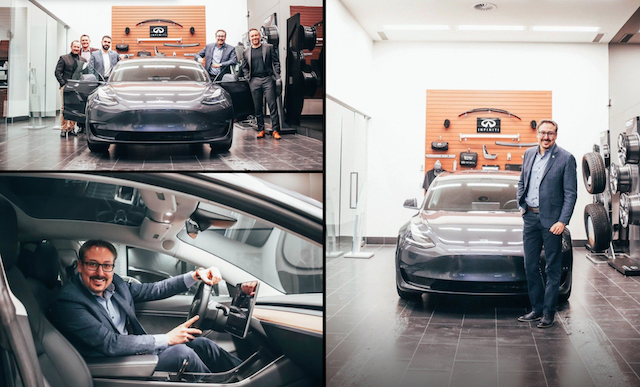 Steve Lussier, the mayor of Sherbrooke who the Infiniti dealership describes as a loyal customer, said he couldn’t keep buying Infiniti cars due to lack of electric options.

It is interesting to point out that despite being part of Nissan, one of the few major automakers to launch an all-electric vehicle early, Infiniti has yet to bring an all-electric car to market.

The dealership also shared the incident on their Facebook page saying that they found “a solution in the meantime” and that they delivered a Tesla Model 3 to Lussier:

Congratulations to Mr. Steve Lussier — Mayor of Sherbrooke on the acquisition of his new car, a Tesla Model 3!

A loyal customer at Infiniti Sherbrooke for many years, he wanted to turn to an electric vehicle! As several electric models are expected by 2021 at Infiniti, we have found a solution in the meantime!

Thank you for your continued confidence, Mr. Lussier, and good luck with the entire Infiniti Sherbrooke team.

Infiniti is expected to release its first EV in 2021.