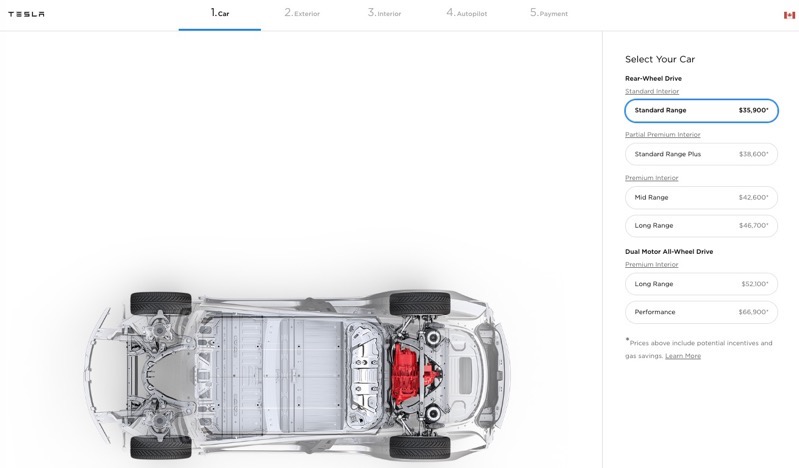 Tesla CEO Elon Musk has finally achieved the company’s dream of debuting a $35,000 USD base Model 3, which just launched at the top of the hour. Tesla’s goal was to debut a Model 3 at that U.S. starting price, and now it’s finally a reality, two years later.

For Canadian Tesla fans, the new Rear-Wheel Drive base model with Standard Range is listed on Tesla’s website starting at $35,900 CAD, after gas savings ($6,700 CAD) and incentives. Currently, buyers in B.C. can save $5,000 as part of electric vehicle incentives. Both of these factors combined allow for this listed price of $35,900 CAD for BC residents.

There’s now also an option for a Standard Range Plus with Partial Premium Interior and 386km range starting at $50,300 CAD before savings. Tesla says to its U.S. buyers, “For 6% more money, you get 9% more range, more power, and an upgraded interior.”

Just over a year ago when Tesla launched Model 3 sales in Canada, the company stated a forthcoming Standard Range model would be priced at $45,600 CAD before incentives and have a range of 354 km. Today, we’re seeing the final cost at $2,000 CAD higher than original Tesla estimates for the Standard Range Model 3, but also with a slightly higher range of 386 kilometres.

Click here to buy your Tesla Model 3 and get 1,500km of free Supercharging.

Update: Tesla also mentioned later this year, Autopilot will be able to “recognize and respond to traffic lights and stop signs,” plus support “automatic driving on city streets.”

According to Tesla’s blog post, the company is closing numerous retail stores and shifting sales to online only:

To achieve these prices while remaining financially sustainable, Tesla is shifting sales worldwide to online only. You can now buy a Tesla in North America via your phone in about 1 minute, and that capability will soon be extended worldwide. We are also making it much easier to try out and return a Tesla, so that a test drive prior to purchase isn’t needed. You can now return a car within 7 days or 1,000 miles for a full refund. Quite literally, you could buy a Tesla, drive several hundred miles for a weekend road trip with friends and then return it for free. With the highest consumer satisfaction score of any car on the road, we are confident you will want to keep your Model 3.

Shifting all sales online, combined with other ongoing cost efficiencies, will enable us to lower all vehicle prices by about 6% on average, allowing us to achieve the $35,000 Model 3 price point earlier than we expected. Over the next few months, we will be winding down many of our stores, with a small number of stores in high-traffic locations remaining as galleries, showcases and Tesla information centers. The important thing for customers in the United States to understand is that, with online sales, anyone in any state can quickly and easily buy a Tesla.