Tesla to Soon Open Sales Centers in Winnipeg and Saskatoon

As spotted by the folks over at Tesla North, two new job listings have been posted on Tesla’s official website for sales advisors, one in Saskatoon, Saskatchewan, and the other in Winnipeg, Manitoba, hinting at the electric car marker’s plans to open sales centers in these regions.

.@Tesla is looking for sales advisors in Saskatoon and Winnipeg! #yxe ⚡️https://t.co/n47SktkJK2

The information was also shared on Twitter by SaskEV, noting that two job listings for Tesla Advisors (Sales) have just gone live in Saskatoon and Winnipeg. 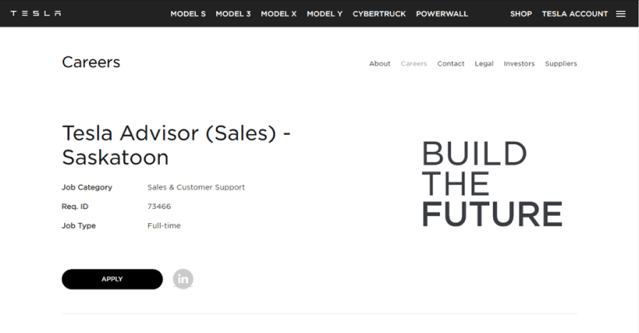 Tesla is looking for an “energetic, highly organized, and hard working” sales advisor to “support customers from the moment they walk into our showrooms to learn about Tesla through to their delivery day experience,” note the job listings.

It is, however, not yet known where Winnipeg and Saskatoon’s Tesla Sales Centers will exactly be located.