Have you been living under a cave for the past few days? Still recovering from your New Year’s Eve bash? Well, if you haven’t heard the iPhone 3G has been officially unlocked by the iPhone Dev Team! Their tiny app, yellowsn0w, was released in Cydia on New Year’s Day.

Their blog post that lays down the notes on the release has amassed over 10,000 comments already from people all over the globe. If you haven’t tried my tutorial on how to unlock your iPhone 3G with yellowsn0w give it a shot. It will require the latest baseband 02.28.00, so the means an update to 2.2 firmware via iTunes.

How Has yellowsn0w Worked Out for You?

The unlock initially was not very successful for many people. This was version 0.9.1, which was soon updated to 0.9.3, and now 0.9.5. I’ve tried all three versions and each time I still am encountering the same problem: I can’t make outgoing calls with my Rogers SIM after the install.

I’ve tried a variety of fixes to get it to work but to no avail. Resetting network settings, countless reboots, popping the SIM tray out, etc. No dice. But of course with beta developments eventually these bugs will be fixed. Since I’m not going anywhere anytime soon I’m not in a big rush to unlock my iPhone 3G. The important thing is that the easiest iPhone 3G unlock is finally out for the masses! 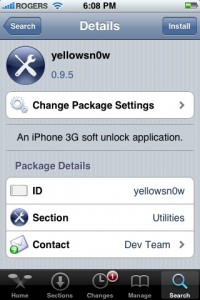 The Dev Team has issued an announcement reminding people that the iPhone 3G unlock is free and no one should be paying for it. According to them, one particular bloke in the UK, named Jody has been taking credit for yellowsn0w and selling it for profit.

So if you know someone that has purchased an iPhone 3G unlock, tell them to demand their money back. As for Jody, my message to him is to be very, very careful as the Dev Team is not a group of individuals you want to mess around with given their special abilities!

How has yellowsn0w worked for you so far? Check out the worldwide feedback at the following yellowsn0w feedback page and even submit your experience too.