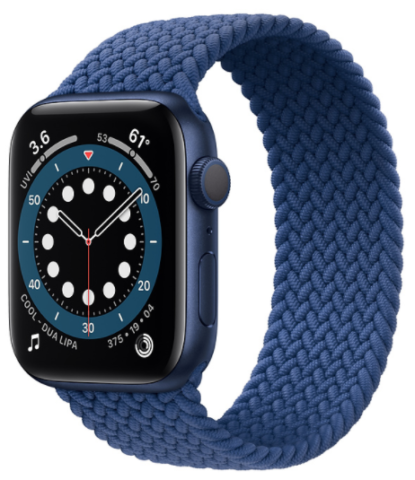 Apple introduced the Apple Watch Series 6 during its ‘Time Flies’ event this month. Alongside the Series 6, Apple unveiled two new band options for the device. A Solo Loop and a Braided Solo Loop band are both available and are unique bands with no clasps are fasteners.

As the Solo Loop and Braided Solo Loop bands are non-adjustable, consumers must purchase a band in one of the nine available sizes to fit their wrist. Apple has provided a printable PDF measuring tool with estimated band sizes.

Theoretically, this should assist customers in finding the perfect size band for their new Apple Watch and wrist. However, it has been discovered that in the event that the band does not fit, the entire Apple Watch Series 6 must be returned as Apple considers it to be a set.

It was reported by MacRumors that any customers finding their Solo bands to be too larger or too small must return the entire device for an exchange. On the surface, this may not seem like such a huge deal. However, the limited supply of Apple Watch Series 6 and bands leave users in a bit of a predicament as they may not be able to purchase a new one until late October or early November.

This has caused some users to raise complaints about Apple’s policy. Some have taken to online forums to voice their concerns while others have spoken to Apple Support. GameClub’s Vice President of Business Development Eli Hodapp shared a screenshot of a conversation he had with Apple Support on Twitter. When asking the rep if it was “insane” to have to return the entire device, the support agent agreed with him.

At least the Apple support person agrees with me. pic.twitter.com/WRn8NtDmue

Hodapp was ultimately given the solution of visiting an Apple Store for an exchange. However, given the world’s circumstances, this option may not be available to everyone. Plus, with limited stock, available Apple Store may not even have a guaranteed replacement.

Ok here’s the solution: You go to an Apple Store, or mail your watch to someone near an Apple Store, and have them say they forgot their receipt. Apple will then exchange the band without issue. This can only be done in person, during a global pandemic. Makes sense! pic.twitter.com/F3yYPLbvfp

Apple has not currently given a response on the matter. Hopefully, the availability of Apple Watch Series 6 units will increase sooner than expected.

Update: It’s worth noting if you have an Apple Store near you, it’s possible to just return the Solo Loop and swap for another, as confirmed by iPhone in Canada reader Mathieu, who did just that in Ottawa. But for those that ordered online a pre-packaged kit and you want to do an online return through the mail, you’ll need to send back everything.