Earlier this summer we told you how some watchOS 4 beta testers started to see VO2 max data within the Health app. With the recent release of iOS 11 and watchOS 4, it appears Apple has now enabled VO2 max calculations, with data showing when a user records a walk or a run, as noted by iPhone in Canada reader Kohsik.

Check out his screenshot shared with us below: 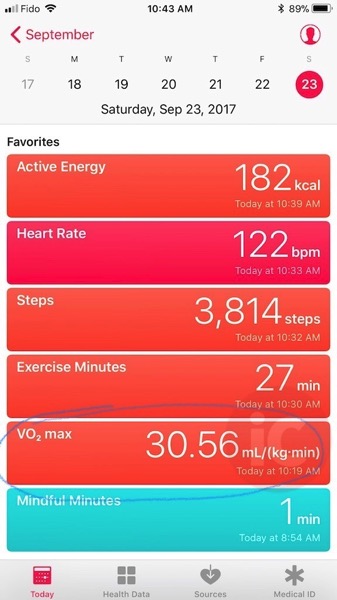 What is VO2 max? Here’s a simple explanation:

VO2max stands for maximal oxygen uptake and refers to the amount of oxygen your body is capable of utilizing in one minute. It is a measure of your capacity for aerobic work and can be a predictor of your potential as an endurance athlete.

These are predicted VO2 max scores, based on your heart rate for users to get a reference of their score.

Let us know if you’re seeing VO2 max scores on your runs or walks recorded with the Workout app in watchOS 4.