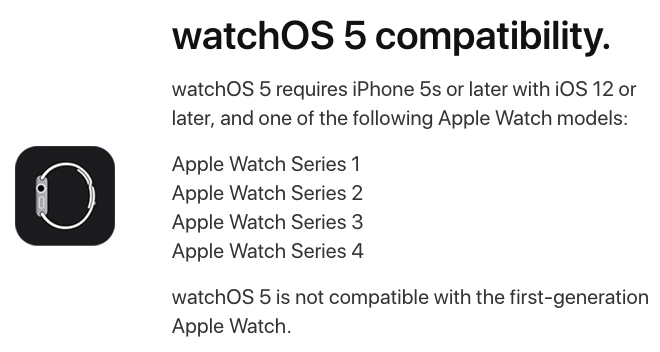 Do not install watchOS 5.1

Reddit users also experienced bricked Apple Watch units after trying to install watchOS 5.1. The update will download, then proceed to install, but gets stuck in a frozen state showing only the Apple logo.

User stargazer666 on Reddit waited nearly two hours, then gave up. The user then tried to restart the Apple Watch and iPhone as well, but ended up with the same result, showing a white Apple logo. Even an attempt to unpair the watch from iPhone resulted in an error, noting the unpair was not successful.

The user’s Apple Watch is no longer showing as paired within the Watch app on iPhone—and now it won’t even pair, as the Apple logo just stays on the screen.

Some users are claiming this issue may be related to those running iOS 12.1 beta on their iPhone.

A lot of users with their Series 4 (and some Series 3) models are suffering the same fate, with this frozen Apple logo on their precious watch after trying to install watchOS 5.1.

If you haven’t installed watchOS 5.1 yet, you’re better off delaying for now and also making sure you turn off automatic updates. You can delete the download by opening the Watch app, then going to General > Software Update > scroll up > Delete download.

For users who contacted Apple about their bricked Apple Watch models, the company’s last resort was to send out replacement units.

How did your watchOS 5.1 update go? Apple may pull this update shortly if it continues to brick Apple Watch models–stay tuned.

Update 8:49 PM PDT: Apple has pulled watchOS 5.1. When you go to Software Update, it will show up, then disappear and show watchOS 5.0.1 and say “Your software is up to date”.