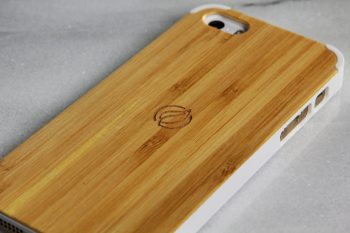 Canadian company Nextware is trying to make a go in the iPhone case business. Its launched a Kickstarter campaign to start production on five cases made with FSC certified wood. That means the wood comes from responsibly managed forests. The Calgary based company was nice enough to send me one of its Bloom cases to try out and so far I’m very impressed.

The five woods being used by Nextware for the Bloom cases are walnut, ebony, maple, rosewood and bamboo. Now the cases aren’t made entirely of wood. They are machined to fit perfectly on a plastic shell. It’s a really nice combination. The three darker woods have a black shell, while the other two have the white shell.

Both the ebony and walnut cases have an all wood back while the other three have raised plastic corners. This is because the maple, rosewood and bamboo are a lot more fragile types of wood. It’s more difficult to work with them and the raised corners add more protection so you’re not chipping the wood and wrecking them. The wood is also coated to make them finger print resistant and it helps keep lint and dust in your pockets from collecting on the cases.

Nextware is trying to raise $11,000 through its Kickstarter campaign. For $29 you can pick up one of five cases. After that, they’ll run you $45. The Bloom cases are some of the nicer wood cases I’ve tried. Let me know what you think.