The Panic blog has made an interesting discovery behind Apple’s Lightning digital AV adapter. After noticing the adapter did not display a clean 1080p signal to their TV, they decided to do a teardown. To their surprise, and the rest of the world, here’s what they found:

Your eyes don’t deceive you — that tiny chip says ARM. And the H9TKNNN2GD part number on there points towards RAM — 2Gb worth. 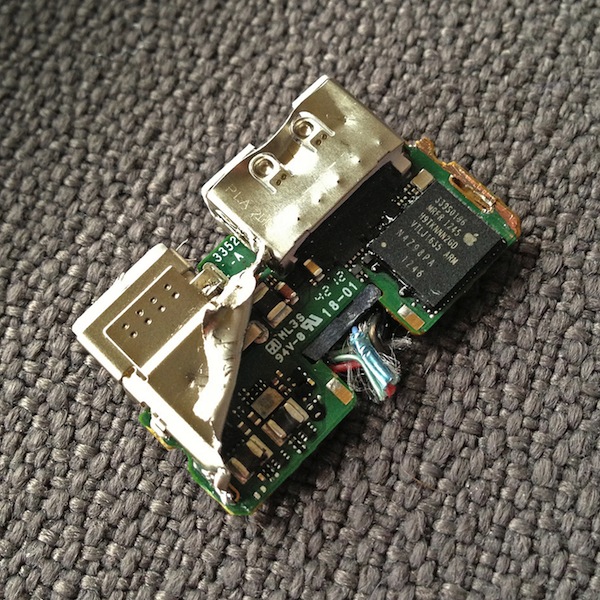 That’s right. The $50 adapter essentially contains a mini computer inside. The folks at Panic suspect the adapter is basically a small AirPlay-like receiver. Some interesting theories:

There are a lot of questions. What OS does it boot? @jmreid thinks the adapter copies over a “mini iOS” (!) from the device and boots it in a few seconds every time it’s connected, which would explain the fairly lengthy startup time for video out. Why do this crazy thing at all? All we can figure is that the small number of Lightning pins prevented them from doing raw HDMI period, and the elegance of the adapter trumped the need for traditional video out, so someone had to think seriously out of the box. Or maybe they want get as much functionality out of the iPad as possible to reduce cost and complexity. UPDATE: Another floated theory: efficient HDCP enforcement.

The adapter contains much more hardware than it should and it’s jammed into a very small space. We’ll have to wait and see what comes out of this.