The folks over at iFixit have completed a teardown of the Pebble e-paper watch, one of the most successful Kickstarter projects in history, started by Canadian Eric Migicovsky, a former RIM employee.

iFixit notes in their teardown there is no repairability scale yet on the watch, but they did say replacing parts would be difficult given the watch is sealed tight with adhesive to keep it airtight for its water seal. For those interested in tech specs, here’s what was found inside the Pebble: 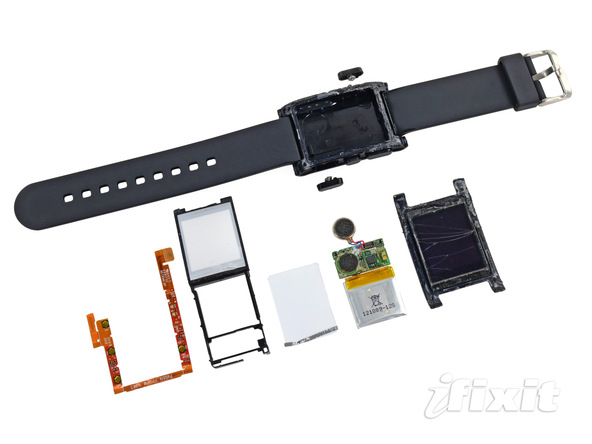 All Pebble watches will support Bluetooth 2.1 (as before) as well as Bluetooth 4.0 (Low Energy)

We probably won’t enable Bluetooth 4.0 at launch, but we’ll turn it on with software at a later date. (via a free upgrade).

We made sure that the Bluetooth module that we’re using had a ‘drop-in’ upgrade option to BT 4.0. We’ve already placed a large order for the 4.0-enabled module, and it will have no effect on our timeline.

We’ve reached out to Pebble for comment on this issue for clarification and will update this post.

After iFixit voiced concerns about old, broken watches eventually laying to waste, Pebble responded it has future plans in place for a responsible recycling program.

The first batch of Pebble watches started shipping in late January, the same day the Pebble iOS app was released in the App Store. We got our hands on our Kickstarter Edition Pebble a while back and will publish our review shortly. Stay tuned.

Have you received your Pebble watch yet? Thoughts so far?