Numerous accessory makers are gearing up for the launch of the iPhone 5 this Wednesday, and Toronto’s iSkin is ready for the launch:

“Apple practically announced the iPhone 5 with its Sept. 12th press invitation,” says Andrew Ackloo, CEO of iSkin. “It’s going to be the most feature-packed iPhone launch in Apple’s history, and we know everyone will want one. That’s why we are preparing to release our line of accessories, which will be unveiled shortly after the iPhone 5 is launched.” 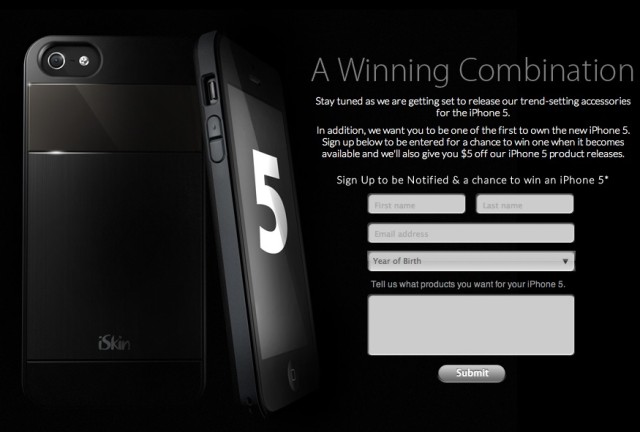 As part of the upcoming iPhone 5 excitement, the company has announced an iPhone 5 giveaway. By signing up for their notification service, customers will receive a $5 coupon towards purchases and also be entered into the draw for a free iPhone 5.

The contest is open to Canada (excluding Quebec) and the USA. You will need to enter your first and last name, email and birthday to enter.