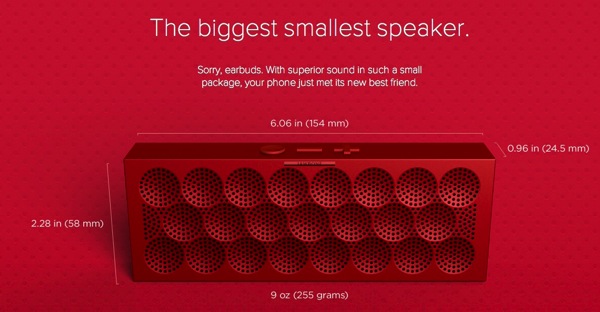 Jawbone yesterday announced their new MINI JAMBOX, available in 9 colours. This Bluetooth speaker is compatible with any iOS device, Android phones/tablets and most Mac and PCs.

The Jambox features two front-facing proprietary drivers to direct sound, two active drivers (stereo pair) and a passive bass radiator to produce what the company calls “clear and high quality sound” for its compact size, due in part to its advanced digital signal processing (DSP) algorithms that optimize the sound at all volume settings.

As you can see below, the speaker is just slightly larger than an iPhone (image via CNET): 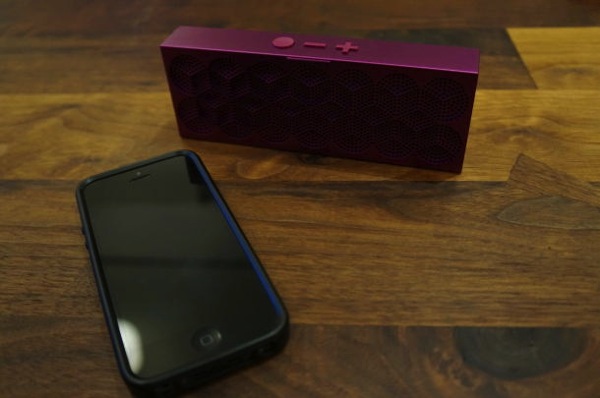 The Mini Jambox, on top of playing music (there’s also a 3.5mm jack for direct connections), features a built-in 360-degree omnidirectional microphone with echo-cancellation for use as a wireless speakerphone. The unit has battery life of 10 hours and can be charged via Micro-USB, and weighs in at 259 grams.

The Mini Jambox isn’t exactly cheap, but Jawbone believes it can deliver better audio output compared to competitors for its portable size. It’s smaller than the regular Jambox, which is $199.

The Jawbone Mini Jambox is available for pre-order at $179.99 from Amazon.ca.