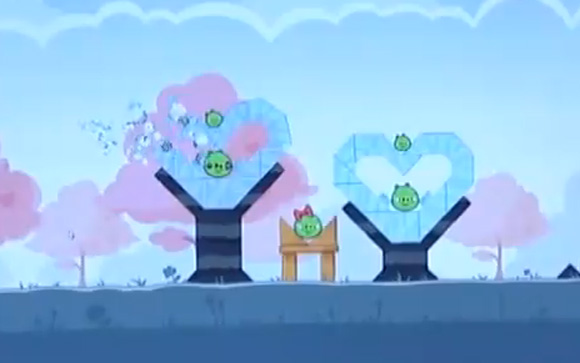 Here we go again. The Rovio team is raking it in with themed versions of their smash hit, Angry Birds. We’ve seen Halloween and Christmas versions so far, but get ready for the Valentine’s Day version soon to be released on February 14th. I bet they’ll get over a million downloads again, easily.

In the depths of this clunky German/English learning TV package about mobile gaming (â€œitâ€™s the adventure of simply drawn charactersâ€, and listen out for the German underneath the dubbing: â€œsmartphone ist top!â€) thereâ€™s an official confirmation about the next iteration of Angry Birds.

Skip to 4mins 20secs,Â  and weâ€™re told: â€œThe designers at Rovio are currently working on new versions of their game, like this update in pink, due to come on the market on 14 February: Valentineâ€™s day.â€

To truly say “I love you” on Valentine’s Day, nothing says it better than gifting the app Angry Birds to your wife or girlfriend–if you want to end up sleeping on the couch, that is.