AOL Instant Messenger (AIM) to Shut Down After 20 Years

AOL has announced the long run of its AOL Instant Messenger (AIM) is set to retire after 20 years, as announced by Michael Albers, VP of Communications Product at Oath, in a company blog post. Verizon, which owns AOL, merged the latter with its recent acquisition of Yahoo to form Oath.

Albers explained how 90s kids experienced AIM as a big part of their lives “but the way in which we communicate with each other has profoundly changed.” For this reason, the service will end on December 15, 2017. 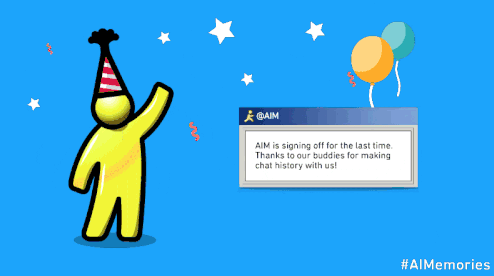 While the company did not announce what’s coming next, it did say “we are more excited than ever to continue building the next generation of iconic brands and life-changing products for users around the world.”

I can’t remember the last time I used AIM, as I was more into ICQ (and later MSN Messenger) growing up.

AIM for iOS is available in the U.S. App Store, but not in Canada right now. Anyone going to shed a tear for AIM? #pouroneouttoday