Yesterday Facebook updated its mobile site with a much requested ‘share’ button, and now that feature has reached its iOS app today. Other new features in the latest 5.2 update includes the ability to tag friends anywhere (finally), use emoji icons and more: 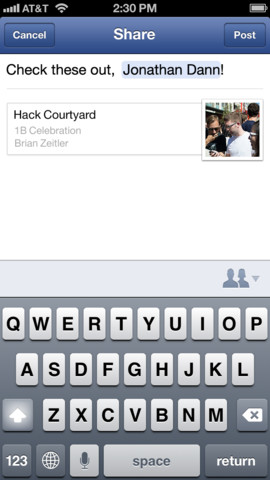 Twitter also announced an update to their iOS app, to allow users to better discover popular tweets and more:

See what’s popular within your network on Discover.
– Tweets, tailored just for you, now appear right in the stream
– These Tweets show photo, video, and article previews so you can engage easily

Get a new perspective when you search.
– A stream of relevant photos appears at the top of your search results
– Results also show media previews for your viewing pleasure

Manage your account with ease.
– If you’ve forgotten your password, now you can reset it in a few simple steps
– If you’ve chosen to protect your Tweets, you can manage your follow requests from your iPhone or iPad

The ‘Discover’ tab is now interesting to look at as the photo, video and article previews make the stream more engaging than it was before. That’s if you use the official Twitter app as your main client of course.