Popular app discovery application AppGratis was removed from the App Store by Apple yesterday, over violation of at least two App Store Review Guideline clauses. Today, company CEO Simon Dawlat has shared his side of the story in a lengthy blog post, saying that even though AppGratis iOS apps are currently unavailable, its app recommendation service “is very much up and running”. 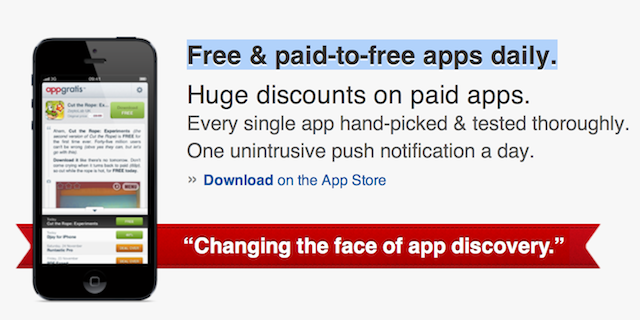 Dawlat said that even though the company is dealing with an incredibly difficult moment, the reports of company’s death are “greatly exaggerated”. He added that AppGratis had dealt with rejections of its app before but was able to make changes to get them approved. “I’m still in absolute shock as to what is happening to us,” he said. According to Dawlat, an iPad version of AppGratis had also been approved just a day ahead of when the app was removed from App Store.

I want to set a few things straight:

I want to tell these people the reports of our death are greatly exaggerated.

Also, some people have been wildly speculating on whether or not we may have been using illegal tactics to secure more than 5% of the iOS marketshare in the US. As the CEO of a 45-person company, all who I’ve hired myself and deeply respect and care for, it’s pretty obvious that I would never have crossed Apple’s rules so foolishly, risking the jobs of so many people and the destiny of a company it took me four years to build.

AppGratis CEO also said that the app will continue to work for the 12 million people who have already downloaded it.