Can you believe it’s been nearly a decade since Apple introduced the App Store? The company has now highlighted 10 years of the App Store in a press release, sharing many “notable moments”, particularly how it “ignited a cultural, social and economic phenomenon that changed how people work, play, meet, travel and so much more.” 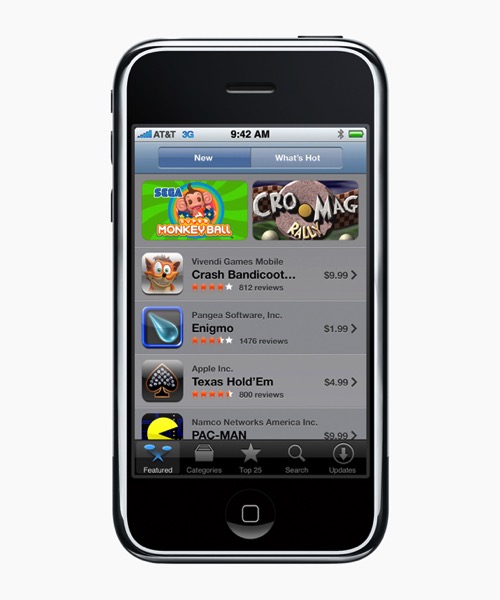 The App Store store launched on July 10, 2008 and only had 500 apps at the time, but now customers in over 155 countries “are visiting the App Store more often, staying longer and downloading and using more apps than ever before.”

Apple has shared App Store highlights in 11 sections—let’s recap what they have detailed below.

I. The App Store Opens Doors for Developers, Puts an All New Experience in the Hands of Customers

Phil Schiller, senior vice president, Worldwide Marketing, Apple, said in a statement, “In its first decade, the App Store has surpassed all of our wildest expectations — from the innovative apps that developers have dreamed up, to the way customers have made apps part of their daily lives — and this is just the beginning. We could not be more proud of what developers have created and what the next 10 years have in store.”

Apple also got a quote from longtime iOS developer, Marco Arment, the man behind the podcast app Overcast, saying “Over its 10 years so far, the App Store has developed into the richest, most diverse, and most accessible software ecosystem the world has ever seen.”

Apple details mobile-first businesses, while also sharing how the classic game Temple Run, from developers Imangi Studios, has been downloaded over a billion times, all thanks to the App Store.

The App Store has also resulted in billion dollar businesses such as Uber and Instagram, while apps for companies such as Twitter, Facebook, eBay, Yelp, Airbnb and Amazon were developed “to meet changing customer behaviour.”

Apple also highlighted gaming in the App Store, listing hit early titles such as Super Monkey Ball, PAC-MAN, Angry Birds, Words With Friends and Real Racing, while console-level games were made possible with new technologies, resulting in titles such as Vainglory, The Witness and Arena of Valor.

Shigeru Miyamoto, representative director and fellow, Nintendo, said “We are very happy that we are able to deliver Super Mario Run, a new Super Mario experience that could be played with just one hand on iPhone, to hundreds of millions of consumers because of the App Store. The App Store allows us to share the joy of Nintendo games with many new audiences, and we will continue striving to provide unique and new game experiences to App Store customers.”

Apple says over 28,000 iOS apps now offer subscriptions, with subscriptions up 95 percent in 2018 compared to last year and as of June 2018, developers have been paid over $100 billion from the App Store.

In-app purchases debuted in 2009 and just one year after the latter’s launch, developers were already being paid out $1 billion, which includes revenue from paid apps as well.

Apple says the “App Store has been the epicentre of a mobile video consumption boom,” with HBO saying its HBO NOW service becoming one of the “most significant moments” in the company’s history.

For Canada, Apple detailed services such as Crave, Netflix, Sportsnet and Global as services consumers here watch on the go on iOS devices.

Apple here highlighted how iPad now has over 1.3 million apps designed specifically for the tablet, while there are now over 200,000 educational and reference apps for students.

Apple says Apple Watch and HealthKit have “paved the way for developers to make health, fitness and wellness apps more innovative, intelligent and interactive,” while downloads for these categories of apps have increased 75% since the launch of the wearable.

There are now over 500 doctors and medical researchers who have used ResearchKit and CareKit for clinical studies, which have seen 3 million participants.

Apple says the rich accessibility features built into iOS such as VoiceOver have allowed apps to “support more customers and lead to a more inclusive and engaging user experience.”

David Niemeijer, founder and CEO, AssistiveWare, creators of accessibility apps, said “The App Store has made the world much more accessible, and made it easier for AssistiveWare to realize its vision of creating a world without communication barriers. Without it, AssistiveWare would likely still be a one-man Mac developer. Now we provide iOS communication apps to over 200,000 people worldwide, many of whom would not be able to communicate effectively without them.”

Other highlights include the Everyone Can Code program launched in 2016, which was the same year Swift Playgrounds for iPad debuted, bringing coding to the masses.

Apple says the App Store now has over 500 million weekly visitors, with the newly redesigned layout from 2017 has had the hundreds of stories from the Today tab “read by more than 1 million people.”

The creators of the iOS game Monument Valley said “The App Store refresh has shown players the creators behind the apps they enjoy everyday. Humanizing apps can only be a good thing and showcasing how they’re made will inspire the next generation of creators from every corner of the world.”

Apple says since the introduction of ARKit 1.0 in 2017, over 3,000 AR apps now reside in the App Store, which made iOS into the “biggest AR platform in the world” overnight.

I wonder where the App Store will be in another ten years. Happy birthday, App Store!