Earlier today BBM for iOS finally launched and as expected, the free app has vaulted to the top free app spot in Canada, the USA and the UK. 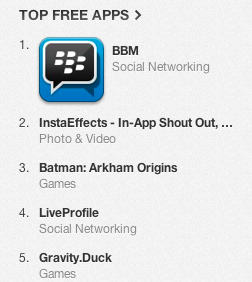 Most likely, people have downloaded the app out of curiosity. When we asked users to add our PIN to test the app, every single one of them told us they had nobody else to test the app with, especially BlackBerry users, since they are now a dime a dozen.

Next 5 million in line – your turn! Open up BBM and click "I got the email" to get started on #BBM right away!

Earlier today BlackBerry explained the rollout would be prioritized for the close to 6 million people who previously signed up for email notifications and told us after that, hundreds of thousands would be activated over the coming hours.

How to bypass waiting in line for BBM for iOS/Android if you previously registered? Here’s how to do it according to CNET (this has worked for others but could have been closed as of writing):

The company’s wait list can actually be bypassed after downloading the app on either your Android or iOS device. Open the app, enter your e-mail address, click Next, and then force-close it.

This can be done on iOS by double-clicking the home button and swiping the app away. On Android, enter the multitasking menu and swipe the app away, or go to Settings, Apps, BBM, and click Force Close. After relaunching the app you should have the power to create an account, which will assign you a unique PIN, and to begin inviting friends.

Click here to download BBM for iOS–it’s free. Are you still using BBM for iOS after downloading it?