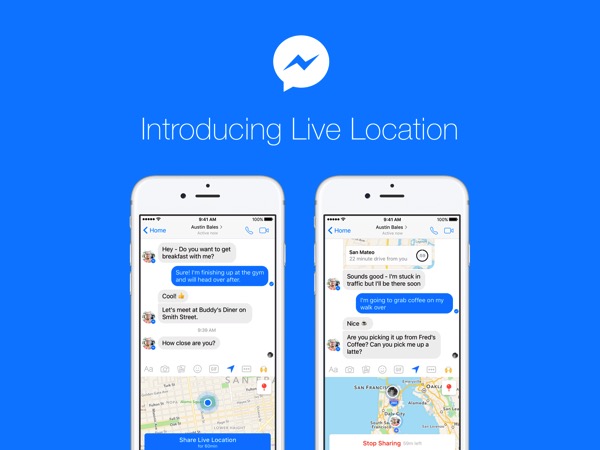 Facebook has announced today that it is rolling out a new location-sharing feature within Messenger called Live Location. This feature aims to make it simpler to share your actual location with your friends and family.

According to Facebook’s blog post, this feature has been under testing for some time now, and users found it helpful when trying to coordinate with friends, telling people how close they are when they are rushing to an appointment, etc.

To start sharing your location, iOS users can tap the Location icon or tap the More icon and select Location. The result will be a map showing your current location and the option to start sharing Live Location.

After tapping Live Location, the person or people you share it with will be able to see where you are on a map for the next 60 minutes. If you are waiting for that someone, you’ll see an estimated time of arrival. But if you want to stop sharing your location before that — you’ll have a small clock in the lower right-hand corner of the map showing how much longer you are sharing your location — you can do it by tapping Stop Sharing.

Another feature is sharing a static point on a map, which could be helpful when you want to inform your friend which coffee shop you would like to use as a meeting point. That feature can also be found under the More icon.