Consumer spending across the globe on Apple’s App Store and the Google Play Store has been on a rise. Global spending has broken records this year, reaching $407.6 million across the two marketplaces on Christmas alone.

Sensor Tower released a new estimated report, which showed that global consumer spending on apps and games has risen quite significantly when compared to 2019.

The data shows that spending has passed $100 billion in a single year for the first time ever in November of this year. On December 25th, consumers on the App Store and Google Play Store spent an estimated $407.6 million on Christmas, which is a 34.5 percent increase from 2019. Last year, an estimated 303 million was spent on holiday. Although the total spending on Christmas may seem like a lot at first glance, Sensor Tower estimates that it only contributed 4.5 percent to the total spending in the month of December so far. 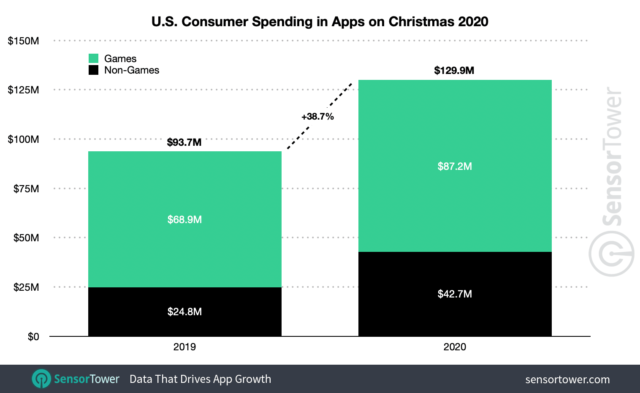 Honor of Kings held the number one spot in this category as it amassed $10.7 million on Christmas. Tencent’s game saw a year-over-year increase of 205.7 percent when compared to last year.

Spending on non-gaming apps is up 59 percent this year. On Christmas, a total of $112 million was spent. Not surprisingly, the category that was the most popular across the App Store and Google Play Store were ‘Entertainment’. TikTok held the number one spot in this category, generating $4.7 million in revenue globally on Christmas.