Google has announced new changes are coming to Gmail’s inbox today on the web, part of a gradual rollout. Now, users will be able to see an inbox organized by categories which appear as tabs, which can be customizable from all five to none, plus allow for drag and drop for email between tabs:

On the desktop, the new inbox groups your mail into categories which appear as different tabs. You simply choose which categories you want and voilà! Your inbox is organized in a way that lets you see what’s new at a glance and decide which emails you want to read when.

You can easily customize the new inbox – select the tabs you want from all five to none, drag-and-drop to move messages between tabs, set certain senders to always appear in a particular tab and star messages so that they also appear in the Primary tab.

Google says to keep an eye on the gear menu and select Configure inbox when the option appears within Settings.

You may have seen this leaked interface on the mobile front a while back and it’s coming to Android and iOS apps “within the next few weeks”. Below is the Gmail iOS side menu view, which shows the various inbox categories. Your regular inbox will load as normal at launch. 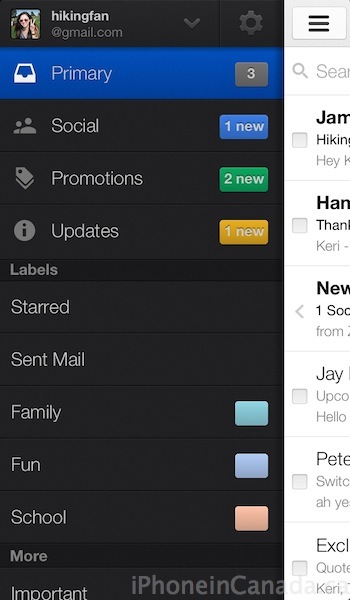 Check out the video below for a preview (top voted priceless comment on this YouTube video: “Inboxes can be overwhelming..? so we gave you three more!”):

Google says these new inbox versions will be available in the next few weeks for the web and its iOS apps, as this is a gradual rollout. Let us know when this new inbox shows up for you!