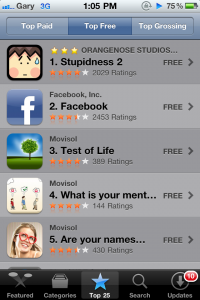 For developers, making it into Apple’s App Store top charts is the equivalent of discovering oil in your backyard. This coveted real estate is seen by millions of iOS device owners, and according to a recent report by Inside Mobile Apps, the way apps are ranked have apparently changed.

â€œWeâ€™ve been noticing changes in the Top Free rankings for at least three days now,â€ said Peter Farago, vice president of marketing at Flurry, which serves 80,000 applications with its analytics product. â€œFrom our point of view, Apple is absolutely considering more than just downloads, which we believe is the right direction to measure true popularity of an app.â€ Other pay-per-install networks tell us theyâ€™ve been detecting these changes too.

Notable changes that reflect a change include Facebook’s vault to the #2 position in the Top Free category (Canada), whereas previously it was always in the lower spots. Factors thatÂ rank appsÂ now possibly include theÂ time spentÂ usingÂ apps, instead of just pure downloads.

This new change brings positive news for iOS users. This will now make it harder for people game the system, either by getting paid downloads or reviews. Also, it means more ‘gems’ will quickly appear in top charts, although I do love hearing about awesome apps via word of mouth.

Less than a week ago, Apple changed the limit to how many apps were viewable within the App Store. Let’s see how this plays out as time passes and the top charts begin to further update.