AllThingsD reports Instagram has released monthly active user data for the first time (instead of just revealing registered users, which were at 100 million in December). Currently, there are 90 million monthly active users posting 40 million pictures per day. The numbers were posted to Instagram’s press page: 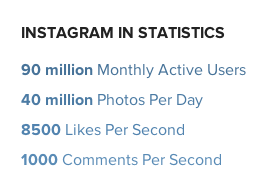 Even with some users ‘revolting’ over the company’s recent change in their Terms of Service (there was even a class action lawsuit against the company), growth remains strong around the globe:

“Instagram continues to see very strong growth around the world,” Instagram co-founder Kevin Systrom told AllThingsD. “With many of the product and internationalization improvements we’ve made, we’ve been excited to see these efforts resonate with users globally.”

The photo network’s growth was boosted with the release of an Android app last April. During that time, Instagram users were only uploading 5 million photos per day, but now that number has grown to 40 million. Instagram has become quite the phenomenon as creative entrepreneurs have managed to piggyback off its success. Last November, Instagram launched web profiles for its users to allow the viewing of bios on the web.