For Pizza Pizza customers that own an Apple Watch, ordering is going to get even more convenient as the former’s iOS app has been updated to support the latest wearable from Apple.

The app will allow you to do the following from Apple Watch: 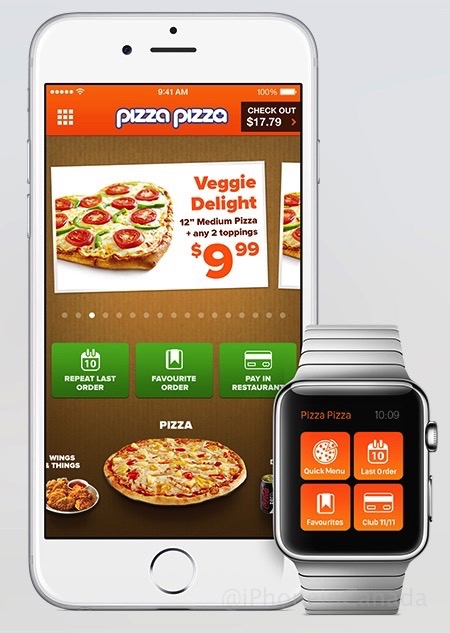 The app was developed by Plastic Mobile (also behind the REALTOR.ca app) and has seen overall downloads past 500,000 since it launched in 2011. Pizza Pizza has over 730 locations across Canada, and also operates Pizza 73 locations:

“We have been on the forefront of innovation since we started delivering pizzas back in 1967,” said Paul Goddard, President and Chief Executive Officer of Pizza Pizza Limited. “Apple Watch represents the next wave of convenient solutions for our customers, and we are thrilled to be part of this evolution.”

Your Apple Watch will also show the 40-minute delivery guarantee countdown timer so you know when to expect your pizza.

Just be sure to stand for a few minutes afterwards when the Apple Watch’s Activity app says you’ve been sitting down for too long, stuffing your face full of pizza.