According to the latest J.D. Power 2018 Canada Banking App Satisfaction Study, the bank with the highest overall satisfaction for the second year in a row is the Royal Bank of Canada (RBC).

RBC led the 1,000 point scale with 788 points, just narrowly edging out TD Canada Trust in second place at 787, while BMO was in third at 781, rounding out the Big 5 banks which garnered an above average score. CIBC scored 766 in fourth place, while Scotiabank was in fifth at 762 (true story: the Scotiabank app is terrible). 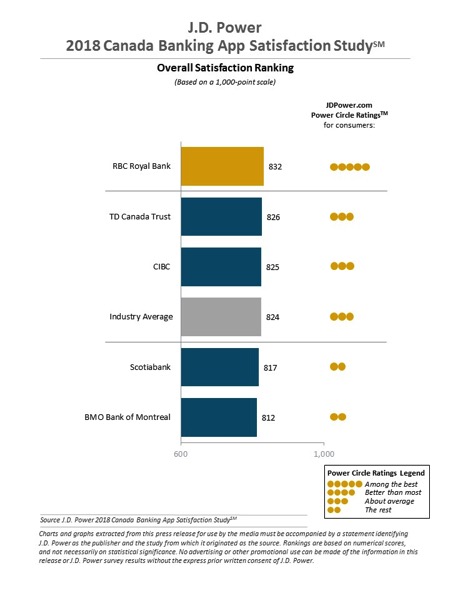 The following six factors are taken into consideration for the study: channel activities; communication and advice; convenience; new account opening; problem resolution; and products and fees.

Peter Tilton, Senior Vice-President, Digital, RBC, said in a statement, “It’s been a tremendous year of growth for RBC Mobile. Our clients have made the RBC Mobile app their primary channel for financial transactions, and with our accelerating pipeline of industry-leading capabilities, we’ll continue to drive a number of North American and global firsts for RBC throughout 2018, ensuring that RBC Mobile continues to deliver exceptional value to clients.”

The 2018 study by J.D. Power noted adoption of mobile banking is growing, led by millennials, with 77% of the latter’s retail banking customers using a mobile banking app over the past quarter.

When it comes to mid-size banks, Tangerine ranked the highest for the seventh year in a row with a score of 829, followed by ATB Financial at 805 and Simplii at 801 at second and third, respectively.

The study took place from June 2017 to January 2018, with responses from nearly 14,000 retail banking customers.