Attention London 2012 Olympic fans, ScoreMobile recently received a huge update for the upcoming Summer games. The notable feature includes push notifications for medal alerts for more than two dozen countries. Other features included are breaking news alerts and a micro site on TheScore.com (it’s simple and pretty awesome) to allow you to keep up with the latest news and more. Push alerts for medals will ensure you will know in real time when a Canadian makes the podium. Now, if only athletes were allowed to use iPhones before bed!

– Medal alerts: Users can subscribe to free push alerts for 25 countries, so they’ll know as soon as an athlete or team has made it onto the podium.
– Breaking news alerts: Stay up-to-date with all the top news coming out of the US, Canadian and Great Britain camps.
– Latest action: Follow all the latest action via a microsite hosted by theScore.com, which carries news, videos, medial standings, blog posts and score updates for events including men’s and women’s basketball, soccer and tennis.

Do note the “Olympics” league is down under the “More Leagues” tab so be sure to drag it into your list of favourite sports leagues. You can then just select which countries you want to receive push alerts for in both medals and news. 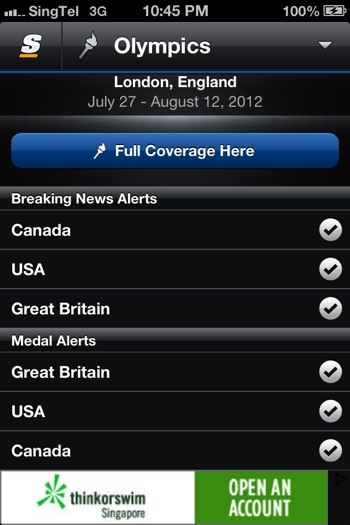 ScoreMobile let us know their app is used by 3.5 million unique users monthly across iOS, Android and BlackBerry platforms. It is by far one of the best apps for any sport junkie. It’s a well designed app that is polished and easy to use, and is deserving of a spot on your home screen.