The second season of AMC’s The Walking Dead debuts this Sunday, February 12th. This zombie apocalypse series is fantastic and FX has just launched their Walkers Kill Count iPhone app to go along with the latest continuation of season 2.

This app uses audio watermarking technology to allow you to play along as you watch episodes live or later. It’s just another way how we’re starting to interact more with the television, and I can’t wait to try it out with next week’s debut. The entire first season is available on Netflix Canada.

The Walking Dead – Walkers Kill Count is free and you can find it here in the App Store.

Play along LIVE with The Walking Dead – Season 2, as you watch the latest episode on FXUK.

Predict the number of Walker kills, who did the most dirty work and what brutal weapon ended their life.

Hit the SYNC button at any point during an episode to connect your iPhone/iPad to the show, whether you’re watching live or later on catch-up.

Watch as your predictions unfold and experience even more intensity with our live, beating, thrillometer!

Follow the latest The Walking Dead tweets and join the conversation.

Boast about your final score with friends via Facebook or Twitter and revel in the Walker kill stats across previous episodes. 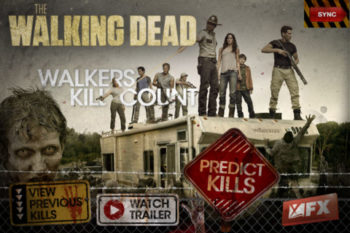 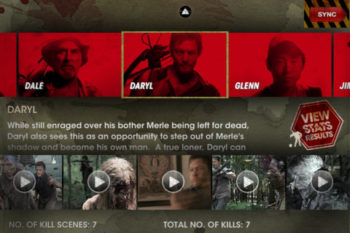 Who’s excited for season 2 to start up again?