[Update] Tweetbot 1.4 to Include Experimental Push Notifications for 1000 Users

Update: Looks like Tweetbot is has suspended push temporarily, as noted by @davhacq and Mike J, and on the Tapbots blog: 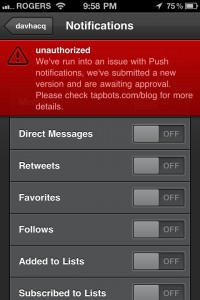 The problem lies in provisioning profile issues due to human error, and a new update has been submitted to Apple. Stay tuned.

One of the most beautifully designed iPhone twitter clients, Tweetbot, is getting an update to include experimental push notification support. Currently, the app uses the services of Boxcar for push, which I don’t mind at all but a native solution would be better.

Tapbots, the team behind the app explained on their blog yesterday why there has been a delay. It’s due to Twitter’s limited release of their site’s streaming API, which requires approval for third parties:

In order to be able to implement push we need access to Twitterâ€™s Site Streaming API. Twitter considers this API to be â€œbetaâ€ and only allows access to 3rd parties after an approval process. We first asked for access to this API a few months ago and were finally granted access recently. This service is very resource intensive on Twitterâ€™s Servers so we fully understand why they are slowly granting access.

The Twitter Site stream can be thought of as a big tube of data that contains all the posts, mentions, retweets, and etc. for each account in the site stream. Each message that comes in from the site stream has to be parsed, compared to the notifications a Tweetbot user wants to see, reformatted for Appleâ€™s Push Service and then sent back out. And of course to ensure the best user experience this has to happen very very quickly.

Now imagine the above process multiplied by hundreds of thousands of accountsâ€¦and wellâ€¦it gets complicated pretty quickly. Any unintended delay can cause the entire system to backup and a simple bug could cause everyoneâ€™s notifications to stop working. We have to put in a lot of effort making sure that we catch as many problems as possible before we launch and quite simply that takes time.

That being said, upon the launch of Tweetbot 1.4 in the App Store, experimental push notifications will be limited to the first 1000 accounts that activate it in settings:

To register your device for push, turn on at least one of the switches in the push notification settings. Itâ€™s all on a first-come-first-serve basis and if you have access to push and turn them all off, someone else may take your spot.

As much as I love using Tweetbot, I still switch from a variety of twitter clients such as the official twitter app, and SimplyTweet. Look forward to this 1.4 update coming soon, and cross your fingers you’ll be one of the lucky ones to try out the new push service.

What iPhone twitter app are you using at the moment?