Techcrunch’s sources say Amazon has acquired True Knowledge, the British company behind a natural language search engine called Evi, which is available for both iPhone and Android. 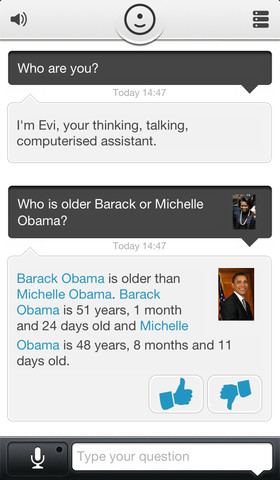 “TechCrunch understands from sources that the company has been sold to Amazon for $26 million. However, calls to Amazon PR, backers Octopus Ventures and the founders of Evi have ben met with a stoney silence. A spokesperson for Octopus told us: “On this occasion Octopus will decline to comment on this specific portfolio company.”

Evi was founded back in 2005 as True Knowledge, but the True Knowledge Internet answer engine went mainstream in 2007. It grew to one million users in a single month in January 2010, to reach 5 million unique users by November of the same year.

A year later, the startup had started working on Evi as we know it today, licensed Nuance’s voice recognition technology, and the Evi app launched in the App Store in early 2012.

Although Amazon’s plans with Evi are yet unknown, the potential of the technology is huge. It could easily be implemented into the Kindle Fire tablet, but there are some whispers about a possible Amazon phone as well.