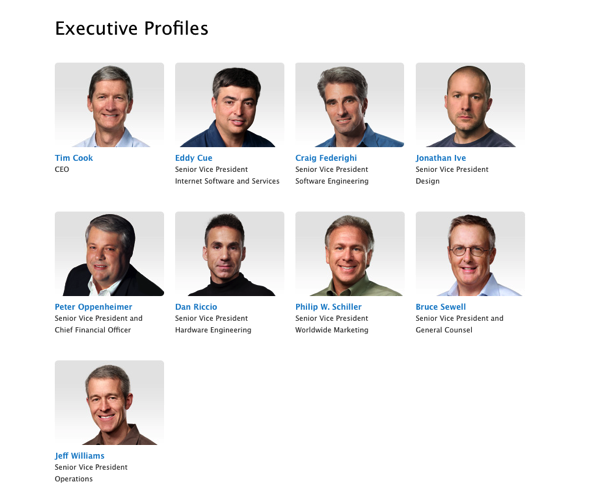 Major shareholders Trillium Asset Management LLC and the Sustainability Group criticized Apple over the lack of diversity in its executive team. The two have said they are disappointed the iPhone manufacturer has only one woman on its eight-member board, and only one woman (who will join the company this spring) who will report directly to Tim Cook, Bloomberg reports.

“There is a general problem with diversity at the highest echelon of Apple,” said Jonas Kron, director of shareholder advocacy at Boston-based Trillium, which manages $1.3 billion. “It’s all white men.”

Shareholders were ready to bring the issue to a vote at a shareholder meeting scheduled for February 28 but backed off when Apple went ahead and addressed the issue through new language in the corporate charter, in which it promised to “consider women and minorities as board candidates.” But the company was cautious enough not to make any commitments.

The Sustainability Group, working with Trillium, had about five meetings with Apple’s investor-relations team and worked out a compromise in which the company added new language to the bylaws for its board of directors, said Larisa Ruoff, who runs shareholder advocacy and corporate engagement for the Sustainability Group.

Apple is now adding the following language to the charter of the board’s nominating and governance committee: “The nominating committee is committed to actively seeking out highly qualified women and individuals from minority groups to include in the pool from which board nominees are chosen.”

Lack of diversity on Apple’s board was just one area where the company faced criticism from shareholders. Excessive executive compensation was another important area. You may recall that back in 2012 Apple’s top-paid executives took home more than $68 million, but last year compensations dropped to less than $4.3 million.