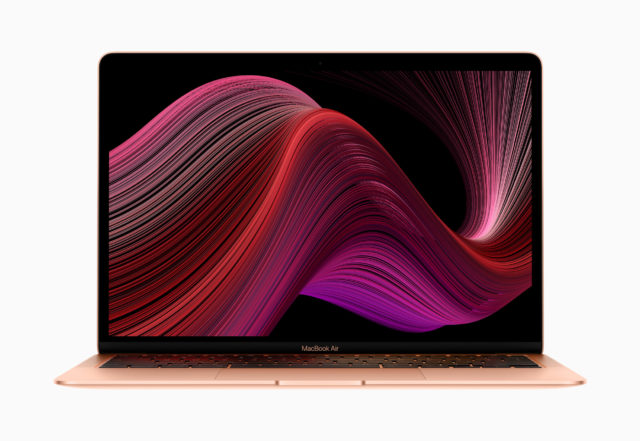 Apple has announced the new and updated MacBook Air featuring new improvements including more storage, faster performance, and Magic Keyboard support. The new MacBook Air will be available for $1,299 CAD.

Apple revealed that the improved MacBook Air will utilize the latest 10th-generation Intel Ice Lake Core processor up to 1.2GHz quad-core Core i7 with Turbo Boost speeds up to 3.8GHz to deliver twice the performance over the previous model. It will also improve the graphical performance, thanks to the Intel Iris Plus Graphics.

Along with faster performance, the 2020 MacBook Air will also have twice the storage, bringing the starting total to 256GB. It will also support up to a 2TB SSD, once again, doubling the previous generation. Additional features include a three-mic array for voice capturing, Force Touch trackpad, and Thunderbolt 3 ports.

The Magic Keyboard, first seen on the 16-inch MacBook Pro will be making the leap on to the new MacBook Air. With a shorter 1mm travel distance between keys, redesigned inverted “T” arrow key arrangement, the Magic Keyboard is a welcoming addition to the new generation of MacBook Air. In addition to all the tweaks on the interior, this year’s Macbook Air will be available in Gold, Silver, and Space Grey.

While starting at the price of $1,299 CAD, Apple will continue to support those using the MacBook Air for education by providing a discounted rate, bringing the total down to $1,169.