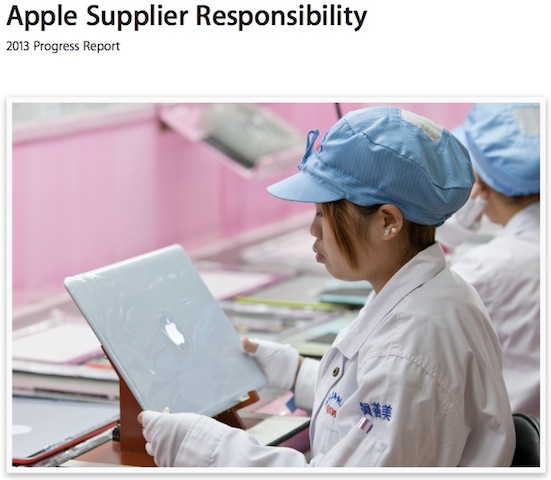 Apple has updated their Supplier Responsibility Report for 2013 and within the document it is revealed the company discovered corrupt third-party labour agents responsible for hiring underage workers:

In many of the cases of underage labor we’ve discovered, the culprit behind the violation was a third-party labor agent that willfully and illegally recruited young workers. In January 2012, for example, we audited a supplier, Guangdong Real Faith Pingzhou Electronics Co., Ltd. (PZ) that produces a standard circuit board component used by many other companies in many industries. Our auditors were dismayed to discover 74 cases of workers under age 16—a core violation of our Code of Conduct. As a result, we terminated our business relationship with PZ.

Apple investigated further and discovered the Quanshun labour agency registered in both Shenzhen and Henan was responsible for supplying child workers to PZ. The agency conspired with parents to forge documents to make the children appear older than they were. Apple alerted provincial governments and Quanshun was subsequently fined and had its business licence suspended and children were returned back to their families.

Apple stressed last year was the third anniversary of their Prevention of Underage Labor training program, which aims to assist suppliers identify and prevent underage workers. Training was conducted for 84 chosen suppliers within provinces known to supply underage labour.

As for other main highlights of the report, Apple notes it conducted 393 audits at all levels of their supply chain (a 72 percent increase over 2011), covering facilities where more than 1.5 million workers make Apple products.

I don’t think there is any other company as transparent as Apple when it come to discussing the labour conditions of their overseas workers. Apple’s rivals, as part of the EICC, aren’t required to disclose audit supplier reports. However, when it comes to China it is hard to detect underage workers when it comes to widespread corruption within labour agencies supplying candidates. Samsung has also been accused of employing underage workers in China.