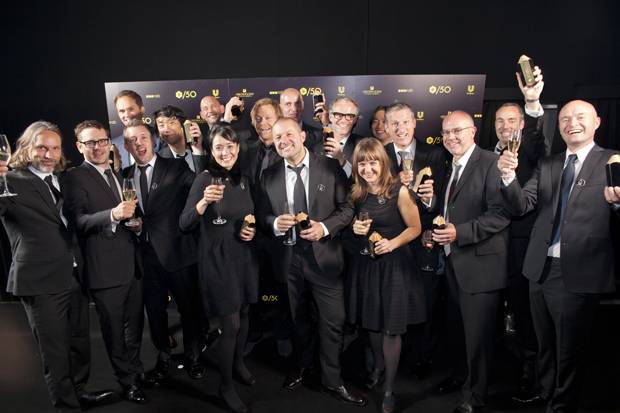 Apple’s products sure are well designed, and that was presented recently at Apple’s iPhone event when they revealed a new iPhone, iPod touch, and iPod nano. Oh, and don’t forget those well designed EarPod headphones that are meant to fit-well in anyone’s ears.

According to the London Evening Standard, all 16 members of Apple’s industrial design team were flown to the United Kingdom to receive awards at the D&AD awards dinner at Battersea Park. One member of the team was Jony Ive, Apple’s design chief, who is known for designing Apple’s top products over the years.

It was notably surprising that Apple’s team showed up in-person because it was the first time the crew had ever attended an actual design award ceremony. D&AD is a British charity in promotion of design and advertising. They run the award ceremony annually and this was their 50th year of design recognition, making the night even more memorable.

Sir Jonathan Ive declined to say anything publicly but wore a big smile as he chatted to fellow guests at the 50th anniversary celebration of D&AD, which stands for Design and Art Direction.

Was Apple’s design team well worthy of these awards? I would think so myself; great work this past decade!

The NFL has announced that Apple Music is now the official partner of the Super Bowl Halftime Show. 2023's Super Bowl LVII will mark the first in which the Cupertino company replaces Pepsi in a multi-year partnership with the NFL. According to the NFL, the deal with Apple Music is focused on "bringing Apple's creativity...
Steve Vegvari
16 hours ago