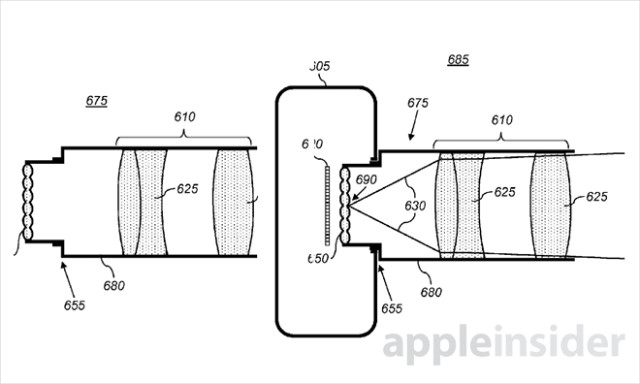 Steve Jobs was interested in acquiring Lytro Inc., the company behind the most famous consumer light-field camera, but apparently the deal didn’t go through for certain reasons. A new Apple patent, however, shows that Apple has done its homework and gone beyond the currently available light-field camera technology improving it. (via AppleInsider)

The patent refers to Lytro Inc.’s Ren Ng’s patented technology as prior art, but it brings notable improvements that affect the image quality and resolution.

Apple’s digital camera invention is configurable to operate in low-resolution, refocusable mode and a high-resolution, non-refocusable mode, as the company placed an adaptor that can be inserted between the imaging lens and the image sensor. As the patent description notes, the adaptor includes a microlens array with multiple microlenses, which allows the camera system to function in both low-resolution and high-resolution modes.

As the patent notes, the hardware described may be used to have a phone conversation or connect to a wireless network. In another version, the system can be used as a camera add-on.

While iPhone camera improvements are welcome, it is yet unknown when Apple will employ this technology in its future iDevices.

The patent credits John Norvold Border and Richard D. Young as inventors, and it was first filed for in 2011.